Manchester United are all set to miss out on their long term target Ezequiel Garay, who was linked with the club since the time Newton discovered the laws of gravity!

The 28-year-old Argentine central defender has been on United’s radar for the past couple of years or more. Trust me, we lost count of the number of transfer articles we did on Garay-United link this year – not to talk about the entire season & certainly not to talk about past years.

Still, for the sake of brushing up old memories, in November last year, we reported United were plotting a triple raid on Benfica, with Garay being on of the them.

Reports emerged in October that Garay allegedly said that he was close to join the Red Devils last summer but ex-manager David Moyes had blocked the deal.

Then throughout the January transfer window and after that the same story continued. Every time whenever United scouts watched any Benfica match, Garay and his partner in crime Gaitan were linked as natural corollary.

Garay has had a great season with Benfica but feels the time has come for him to move elsewhere. Probably he is also fed up with Manchester United link just as we are.

Portugal newspaper O Jogo reports that Russian outfit Zenit Saint Petersburg want to sign the former Real Madrid defender and have hold talks with Benfica over the possible signature. Garay has given Zenit the green signal and wants to play in Russia next season. 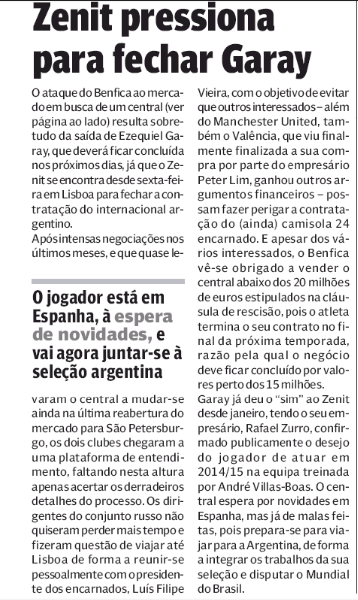 Another Portuguese newspaper Record reporting that a deal in the region of €20m is settled, with Real Madrid profiting 50% from the transfer sale.

Rafael Bray, Garay’s representative wants the deal to be concluded before the World Cup. So, it seems like Garay has made up his mind to leave Benfica after three wonderful seasons. We will never know whether there was at all any serious interest from Manchester United, but given the volume of articles written in press over the past couple of years, one can say another long term target slipped away from the hands of the Red Devils.