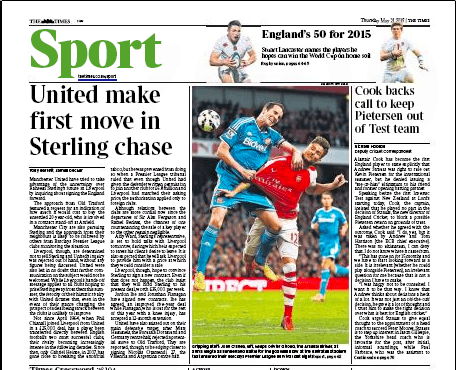 The back page story of The Times doesn’t bring good news to the Liverpool fans.

Manchester United have inquired about signing Liverpool’s forward Raheem Sterling. The Times claim the approach from the Old Trafford club featured a request of how much it would cost to buy the unsettled 20-year-old, who has still two years left on his contract and has been involved in a contract stand-off at Anfield

Manchester City are also thought to be interested in signing Sterling while other Premier League clubs have been the monitoring the situation as well.

Liverpool meanwhile are determined not to sell Sterling. The club have outwardly rejected United’s move, without any figures being discussed. The Times say United were left with no doubt that Liverpool will not entertain any further communication on the subject.

Meanwhile, Aidy Ward, Sterling’s representative, is likely to hold talks with Liverpool on Friday, where he is expected to convey to the club hierarchy of his client’s desire to leave. He would also ask Liverpool tp provide him with a price at which they would consider a sale.

Liverpool are under no pressure to sell their prized asset. They hope to convince the England international to sign a new contract. In case he doesn’t sign a new deal, Liverpool will hold on to Sterling to his present deal worth £35,000 per week.