Like father, like son. David Beckham’s son Brooklyn Beckham is following his father’s footsteps by training at Manchester United. 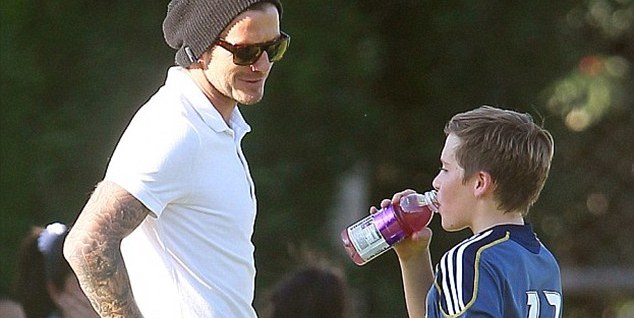 According to reports from Daily Mail, Brooklyn the eldest son of David Beckham, was at Carrington ground for a trial accompanied by his father. The youngster had trials with Chelsea in January and has been training with Queens Park Rangers’ academy.

However, Brooklyn’s arrival doesn’t mean he will be granted permanent association with the club. It is understood that the Red Devils are happy to take a closer look at the kid, as he is trying to carve out his own football career.

Speaking to the Manchester Evening News, a source said: “He was there with his dad and took part in a practice session with one of the academy sides.

“It was a chance for him to impress and if he’s done well then no doubt the club will look at taking him on.”

Brooklyn took part in a training session with one of the club’s youth teams while his form has captured the eyeballs of Reds officials. Brooklyn’s younger brother Romeo has been a reported Arsenal fan and has trained with PSG youth team and Arsenal academy before.