Manchester United are back in the race for Benfica’s highly rated winger Nico Gaitan, according to reports from Portugal.

I’m sure many of you will remember that Gaitan was linked with a move to United in the last January transfer window, while the Red Devils had made several attempts (if the reports are to be believed) to sign him before. 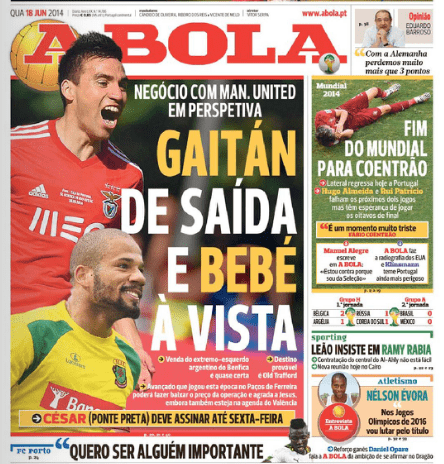 Let me elucidate here. Back in 2012, yes, two years ago, Jason Burt of The Daily Telegraph published a story, that says Manchester United had agreed a deal to sign Gaitan, while Fabio and Macheda could be included in the deal as a part exchange.

Again last summer, reports surfaced that Manchester United were set to rekindle their interest in Gaitan but surprisingly no official bids had been launched from the Red Devils camp. 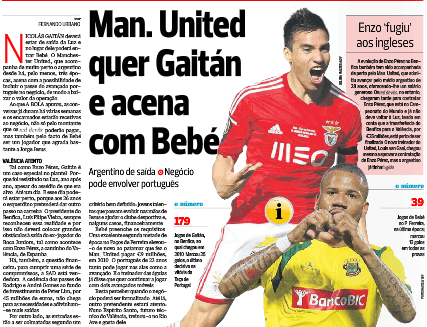 The same trend continued under David Moyes with Portugal newspaper Record reported back in January that the former United manager was plotting a move to sign the Argentine winger in an attempt to give his midfield a fresh new look.

It seems like the new Manchester United manager Louis van Gaal is set to rekindle that interest again, with Portugal newspaper A Bola now claiming the Red Devils are favourite to sign him in the summer, not only because of the money they can put on the table but also are ready to offer Bebe in trade, which pleases Benfica.

Benfica are set to lose Enzo Perez, André Gomes and Rodrigo to Valencia, and Bebe is in line with their policy to bet on young players and maximize their potential in the transfer market.

Opinion from Soccerlens’ Portugal reporter Manuel Traquete: Gaitan has a market value of €18m and would be a top signing for Manchester United. Yeah, the deal likely to happen. Benfica usually make at least one huge sale every summer and Gaitan is almost certainly off.