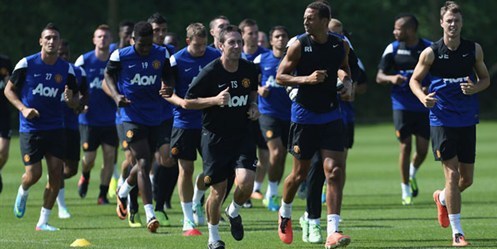 Manchester United players had their first opportunity to work with their new manager David Moyes, in a sun-baked day at the AON training complex, today.

Wayne Rooney, whose future has been well speculated in the media, was also seen enjoying his first day back at training, with the rest of the squad.

The Red Devils have an action packed tour programme prepared for them by AON, their principal sponsors.

Moyes’ team is due to travel to Bangkok, Sydney, Yokohama, Osaka and Hong Kong all in the month of July and then visit Stockholm on first week of August to play against AIK Fotboll at the Friends Arena.

Moyes could be without the services of Chris Smalling, Ashley Young and Nani – with all three players nursing injuries and the club will assess their fitness at the start of next week.

Smalling and Young were seen on crutches after the operations they had towards the end of last term, while the Portuguese required a surgery too.

“There’s a doubt about Ashley Young and Chris Smalling,” stated Moyes. “Nani has had an operation on his nose.

“There are a few [doubts] but they may still go on tour. Certainly Chris and Ashley we’ll assess at the start of next week.”

Manchester United’s first match under their new manager David Moyes will be against Singha All-Star XI  at the Rajamangala Stadium in Bangkok on the 13th of July, in a few days time.