The first Manchester derby of the season sees both sides lower down in the table than they were expecting at the start of the season.

Manchester City dropped to third last weekend after losing 2-1 at West Ham, whilst Manchester United are as low as 8th, although taken eight points from their last four games as they have shown signs of turning the corner since the close of the transfer window.

This match pits two of the leagues best and most-exciting attacking units against each other in what could make for a Super Sunday at the Etihad Stadium. However, the early signs are that this is not Manchester United’s season, although City still have it within them to make a concerted push for the title. Best-Betting-Sites.com has City down for the win, and we’d recommend the same bet. You can’t win a title in October, but United lost their title bid as far back as September.

David Silva is the only absentee for Manuel Pellegrini’s side – a big blow but the Chilean manager has the rest of his squad available at his disposal.

Things are looking a little better on the injury front for the visitors. Radamel Falcao should be fit to return after missing last weekend’s draw with Chelsea. With Wayne Rooney back from suspension and Robin van Persie fine, van Gaal has three strikers to choose between once again.

Antonio Valencia and Jesse Lingard are both still sidelined whilst Ashley Young has only played 15 minutes since August. Marouane Fellaini has been praised for his performances in the past two games.

Jonny Evans and Paddy McNair are also out but Phil Jones should be back from the shin injury that caused him to miss last weekend’s game. 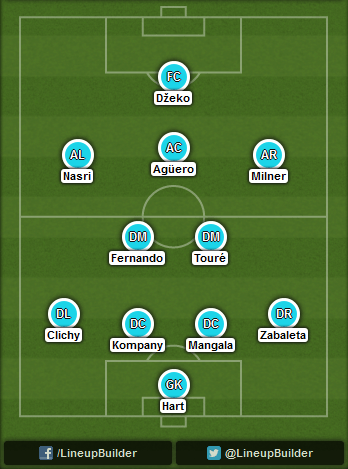 This looks like Manuel Pellegrini’s strongest lineup. There’s always a debate over who will start left-back. Eliaquim Mangala hasn’t settled in too well but we think he’ll get the nod ahead of Martín Demichelis. James Milner has been playing well this season and deserves his place in the team. His hard work and tracking back off the ball will also be important defensively, especially with Ángel Di María playing on the left side of the United attack. 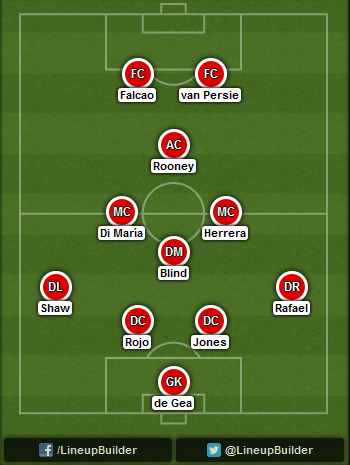 Louis van Gaal has changed his formation a couple of times already this season but we think he’ll stick to his diamond formation and leave two strikers up front even if they are going to the champions. Wayne Rooney has to play deeper than the strikers for his off the ball workrate whilst this lineup does leave out the physical presence of Marouane Fellaini.

Sergio Agüero vs Phil Jones
Manchester United managed to hold Chelsea down to just one goal last weekend which must be seen as a good and unexpected result from the Red Devils based on their start to the season. Still, the Blues were without Diego Costa. Manchester City have Sergio Agüero who is in great form and will fancy a one-on-one match up with Phil Jones or any of the Manchester United defence. The Argentine striker has a good record in Manchester derbies too. The only time Phil Jones and Marcos Rojo have lined up as the centre-back duo for Manchester United this season, they conceded two goals at West Brom. One of them was Saido Berahino’s one-on-one via a through ball from the half-way line.

Samir Nasri vs Rafael
With David Silva out Samir Nasri would be the obvious choice to play on the left wing regardless how many strikers the manager goes with.  The French midfielder has not been as effective so far this season as of last but we know he is a great threat in front of goal.  He gets in lots of goalscoring positions but doesn’t always convert.  Manchester United’s Brazilian full-back does get caught out of position a lot but does have the pace to get him out of trouble a lot of times.

Ángel Di María vs Pablo Zabaleta
A battle of the Argentines down one side as Ángel Di María could meet Pablo Zabaleta. The Manchester United midfielder looked as though he may have been carrying an injury last weekend but provided he’s fully fit for this one you can expect him to have some influence. Very difficult to defend against, City will need Zabaleta and company (that’s the midfielders in front of him and not a misspelling of their captain) if they’re to prevent Di María being involved in the goals.

Prediction: Manchester City 2-1 Manchester United
Manchester City haven’t been firing on all cylinders of late and Manchester United did get a creditable draw with league leaders Chelsea last weekend. However, the United defence still looks shaky and Sergio Agüero could single-handedly have the beating of them.  City have goalscorers from midfield and set pieces too.