The French champions, free from FFP regulations, are once again making their moves in the transfer market. They have already signed German goal keeper Kevin Trapp, but Di Maria remains their top priority.

Di Maria joined United last season from Real Madrid for a British record transfer fee, and earns a reported wage salary of £280k/wk. However, he struggled to replicate his old form for his new club and endured a frustrating campaign in the Red shirt, leading to speculation that he might leave the club.

The Argentine impressed heavily during the Copa America and admitted that he wants to prove his worth at United next season. 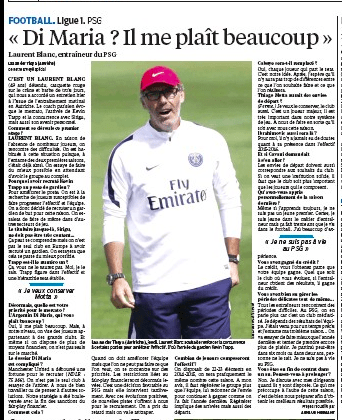 Le Parisien claimed that PSG were preparing a massive €60m bid for Di Maria, which should please United, who paid €75m to sign him from Real Madrid.

PSG boss Laurent Blanc was asked recently whether PSG would be interested in signing the Argentine. He said: “Di Maria? I like him a lot. But at our level we aim for players who play for other big clubs. And even if we have the financial means, we’re not alone in the market.”