It doesn’t need any rocket science to guess that central midfield is the one area that Manchester United need bolstering in the upcoming transfer window. Throughout the summer, the Red Devils were linked with avalanche of midfielders, including the likes of Cesc Fabregas and Ander Herrera, but none of the deal materialized, as the frugal search continues.

According to latest report from the Sunday People, Roma star Kevin Strootman is the one David Moyes wants to add to lead his midfield. The 23-year-old was linked with a move to Manchester United on several occasions last summer but as with the other targets, the Dutchman slipped through United’s fingers, as he joined Serie A giants Roma from PSV Eindhoven, for a reported fee of £17m.

Former PSV manager, Dick Advocaat, believes that Old Trafford could be a likely destination for the midfielder and that a move in future is inevitable.

“Strootman is a pure professional but I do not think he will stay at Roma that long,” said Advocaat. “And then it will be a team of the calibre of United who will get him.”

The report says, United coach, Phil Neville made a personal check on Strootman in Holland’s recent international friendly with Colombia and that the Red Devils are plotting a £30m audacious swoop.

Strootman is having a brilliant season so far with Roma and it’s highly unlikely that the Giallorossi would sell him in the winter. 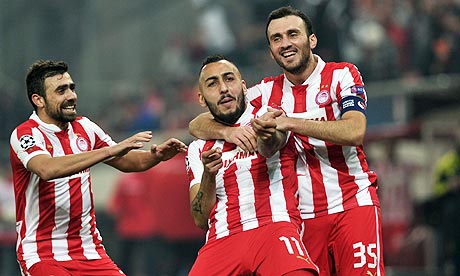 Over to Arsenal and readers you must be fed up, as we are to see the same story regurgitating from British tabloids, again and again. Greek striker Konstantinos Mitroglou has been linked with Gunners for the umpteenth time this season, and Daily Star still finds it interesting enough to tell us, that Arsene Wenger finds the striker perfect foil to Olivier Giroud.

The striker is valued at £8m and has scored 14 goals in 10 games already. We are not too convinced whether such performance in the Greek league is too attractive a proposition for a team like Arsenal, still for the sake of record, there’s another Arsenal target who has also scored 14 goals in 10 games thus far and he the one who Arsenal should be aiming for. Hope you got the clue.