Benfica winger Nicolas Gaitan has been on the radar of Premier League and other European heavy weights for some time now.

Manchester United are thought to be his biggest admirers and going by the reports, the Red Devils have attempted to sign him on several occasions in the past. 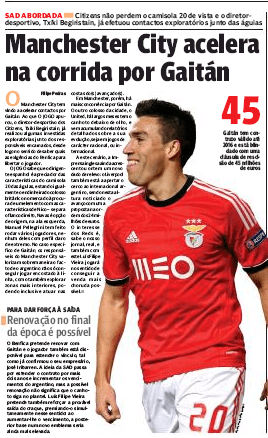 We have followed Gaitan transfer saga in closer details this season, and Portuguese press have every time mentioned United’s interest on the player. Liverpool are also rumoured to be interested in the winger, though we explained there was hardly any truth on that story.

Portugal newspaper O Jogo reports today that Manchester City, and not Liverpool, are showing keen interest in Gaitan. City have already approached Benfica to know what they demand for the highly talented winger.

The Citizens are looking for a player of Gaitan’s characteristics and their sporting director is a big appreciator of his talents. He can play not only in the wings but in more interior zones, even behind the striker.

The report say City are not alone however in the chase, their neighbours and derby rivals United are also keeping an eye on Gaitan and have plenty of scout reports on him this season.

Benfica are not particularly interested in selling him though but if any potential suitor can pay his  €45m release clause, they could be forced to sell.