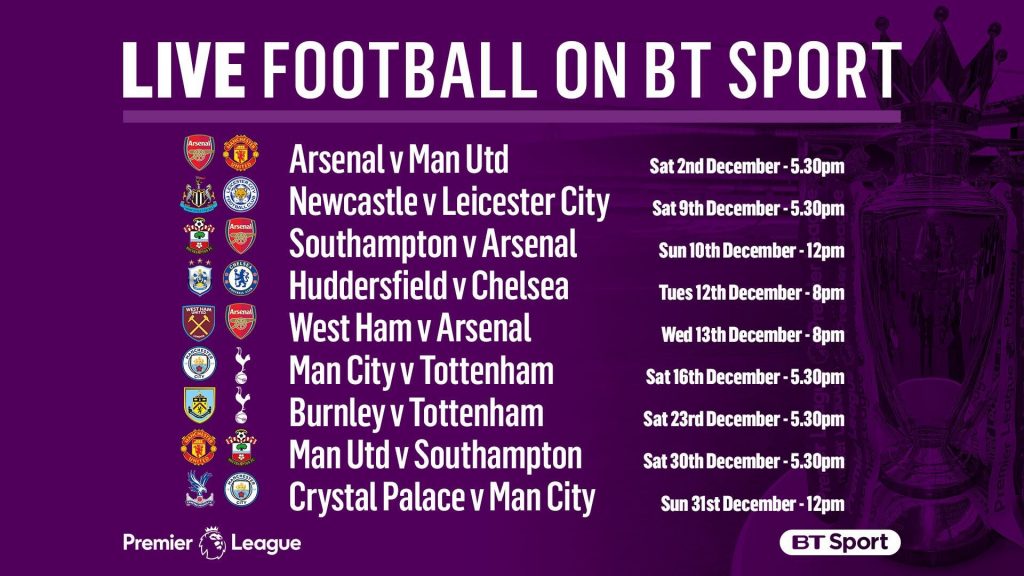 Football fans are set for a packed schedule of live Premier League action on BT Sport this December, with nine matches being shown across the month exclusively live, including the clash between Arsenal and Manchester United and fellow Champions League hopefuls Manchester City and Tottenham Hotspur.

The match between Arsenal and United kicks-off a packed month of sport in December at 5.30pm on Saturday, December 2. The month will also see the finale of the Champions League and Europa League group stages.

BT Sport also offers up two midweek matches ahead of the festive season. First up will be Huddersfield Town taking on champions Chelsea on Tuesday, December 12 (8.00pm).

The following day at 8.00pm sees Arsenal take the trip across London for a match against West Ham United. The week culminates with a potential six-pointer when City and Spurs battle it out in a 5.30pm kick-off on Saturday, December 16.

Mauricio Pochettino’s men will return to BT Sport the following weekend as they head to the north west once again to pay Burnley a visit. That match kicks-off on Saturday, December 23 (5.30pm).

The final two Premier League matches of 2017 being shown on BT Sport will see Manchester United host Southampton for a 5.30pm kick-off on Saturday, December 30, ahead of the match in south London between Crystal Palace and Man City kicking-off at midday on New Year’s Eve.

Simon Green, head of BT Sport, said: “December and the Christmas period is always a busy time for football fans.

“BT Sport is showing a vast amount of live sport, including the biggest event in the cricket calendar, the Ashes and the culmination of the group stages in the UEFA Champions League and UEFA Europa League.

“As ever, BT Sport will be showcasing outstanding matches in the Premier League with games featuring the title and European competition contenders.”