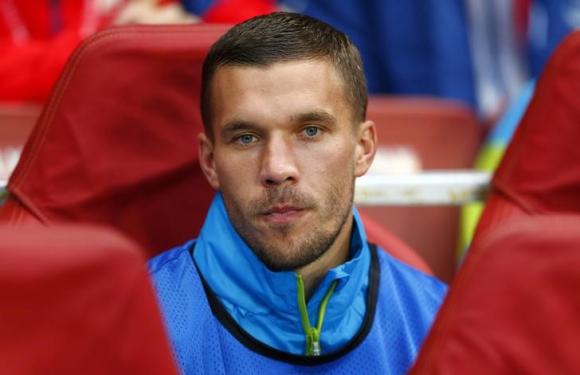 In football, things can change very quickly. One moment, you can be a world cup winner, the next moment you could be wandering elsewhere searching for first team places. Take Lukas Podolski for an example.

The 30-year-old striker won the 2014 FIFA World Cup with Germany. However, he was still facing an uncertain future at Arsenal.  He dropped down the pecking orders at the North London club, and was sent on loan to Inter Milan in the January transfer window, where he had another nightmare experience.

He made 17 Serie A appearances for the Nerazzurri but didn’t make any lasting impression, managing only one goal for Inter. Roberto Mancini is not interested in signing him up permanently, which means Podolski will return to Arsenal for pre-season training.

Speaking to Bild, Podolski said in retrospection it is now easy to say that move to Inter was a wrong step. He wants to move on and looking to return to Arsenal training next month where he will learn his fate.

Podolski said: “I have always felt comfortable there. Coach, team, fans – everything is okay at Arsenal. I plan to return full attack, so I play. I have the qualities to play at Arsenal.”

He feels that his style of football is well suited for the English Premier League. At the same time he understands that his future decision rests in the hands of the club only. Podolski has a contract till June 30, 2016 and Arsenal might be looking to sell him for a reasonable transfer fee this summer before he becomes a free agent.

If the reports are to be believed, Arsenal have already found a striker of their choice for next season. The Gunners have targeted Borussia Dortmund attacker Pierre-Emerick Aubameyang and are preparing a massive €40m bid for the Gabon international.