In the aftermath of yet another failed qualifying campaign, Scotland can at least take great heart in their gutsy and impressive performances over the past 14 months. Those performances have seen an unprecedented rise through the FIFA Rankings to the all-time high of 13th place. Putting that into perspective, Scotland are now ranked higher than the USA, a country with almost 60 times the population, and Greece, the current European champions.

This rise will have earned Scotland a pick as second seeds, when the European qualification groups for the World Cup in 2010 are drawn in Durban on Sunday; meaning that there will be no repeat of this campaign’s “group of death” (which of course featured both the winners and runners up of the last World Cup, Italy and France). 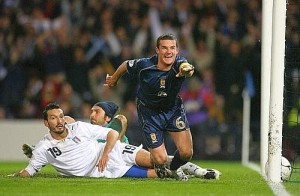 Scotland can therefore take comfort in the fact that, rankings wise, they should be the second-best side in their group meaning a second place finish should be more than feasible. With a group of players who seem capable of making through at least another two campaigns, with a couple of exceptions, it’s fair to say that the future is bright for Scotland.

Of course before we deal with the future we’re forced to think about what could have been in the present. Many have blamed Scotland’s exit on the official for the crunch game against Italy. But while Manuel Enrique Mejuto Gonzalez certainly had what can only be described as an ‘off day’, Italy had as many decisions ruled against them as the Scots. It just happened that Scotland were the unlucky ones on the night.

Where to start? Gonzalez ruled an onside goal to be offside and an offside goal to be onside. The former being an Antonio Di Natale effort when at 1-0, Italy were dictating the play, and the latter being Barry Ferguson’s plucky equaliser following a Gianluigi Buffon parry. But most heartbreakingly of all, Gonzalez and his assistants’ worst moment came in the dying minutes of the game. When a draw seemed almost certain, Alan Hutton was barged into and yet somehow had a free kick decision go against him. That Italy scored the winner from this clearly incorrect decision was desperately unfair to Scotland who had matched Italy in almost every department, with the notable exception of concentration in the opening minutes of the match. 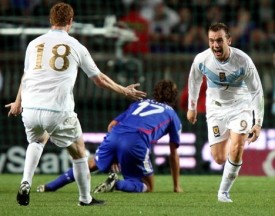 It is from this that Scotland can take most heart. Against two of the world’s best sides, they didn’t lie down and accept defeat as they perhaps would have in the past. Two incredible 1-0 victories over France and a desperately unlucky loss against Italy have proven that Scotland can rub shoulders with the world’s elite and not look at all out of place. The resilience shown by the side, who simply refused to give up, was rewarded by the thousands of proud Scotland fans who applauded their fallen heroes as they took to a victory lap following the game.

It is, of course, unfair to blame all of the side’s misgivings on poor refereeing. The fact that Scotland conceded a goal after just 68 seconds underlined the slow and uneasy start the Scots made to the match. With the exception of the outstanding Alan Hutton, the Scotland defence were little better than average throughout. Stephen McManus and David Weir are good defenders by Scottish Premier League standards, but against the attacking trio of Di Natale, Luca Toni and Mauro Camoranesi they did at times look to be out of their depth. At 37, Weir simply doesn’t have the pace to keep up with a quick front man, whereas McManus is the perfect defender…with the exception of his marking capabilities.

One must wonder why there was no place in the starting eleven for Gary Caldwell, scorer of the only goal of the game against France at Hampden last October. Why, when Russell Anderson was in the form of his life for Aberdeen last season, could he not get a look in past the aging Weir? And there are a plethora of younger center backs who could all do the job in the Scotland defence, including Caldwell’s brother Stephen Caldwell, Hearts captain Christophe Berra, Andy Webster (when fit) and even Steven Pressley who, at 34, still has three years on Weir. Surely with the race to Austria and Switzerland now over it’s time for Weir to step down and let one of the younger, quicker players take his place.

Left-back, a position highlighted to be Scotland’s weak spot by Calcio Italia (p.11, No. 147, Nov 2007) is another place the Scots need to look to strengthen. Gary Naysmith has done the job on and off down the left flank for several years, but he isn’t the player he once was, and had to drop down a division to Championship side Sheffield United in the close season for regular first team football. His current backup, Graham Alexander, has never played at the highest level and at 36 is not a viable long-term option. With Hutton’s emergence on the right Scotland need to make the left side equally as strong, and with options such as Rangers kid Stevie Smith and Derby left-back James McEveley, Scotland need to start looking to strengthen their defence.

With a stronger backline protected by Craig Gordon, Alan Hutton would be allowed the opportunities to press further forward without fear of being over-exposed at the back, and with the extra muscle and speed in the middle of the park, this could allow for one of the five man midfield to be pushed forward into a second striker role, something which Scotland looked as though they could have used on Saturday. James McFadden is a quality player but lacks the experience of playing the full 90 minutes and often plays better behind a more out-and-out striker such as Kenny Miller or Kris Boyd. Boyd in particular is the Gary Lineker sort of player who has a habit of getting a goal in the box. With McFadden supplying the front man as opposed to being the man in the goalscoring position himself, perhaps the effort in the 80th minute wouldn’t have ended up just past the post.

Overall however, there are certainly more positives than negatives. With McLeish looking to be sticking around for the foreseeable future (fingers crossed), it is with great optimism and a small hint of expectation that Scotland look to next September and the start of the journey to South Africa in 2010.

[Editor’s note: If you enjoyed this article, you might also be interested in read ing “Scotland and Northern Ireland Illuminate Euro Qualifiers” by Anthony]