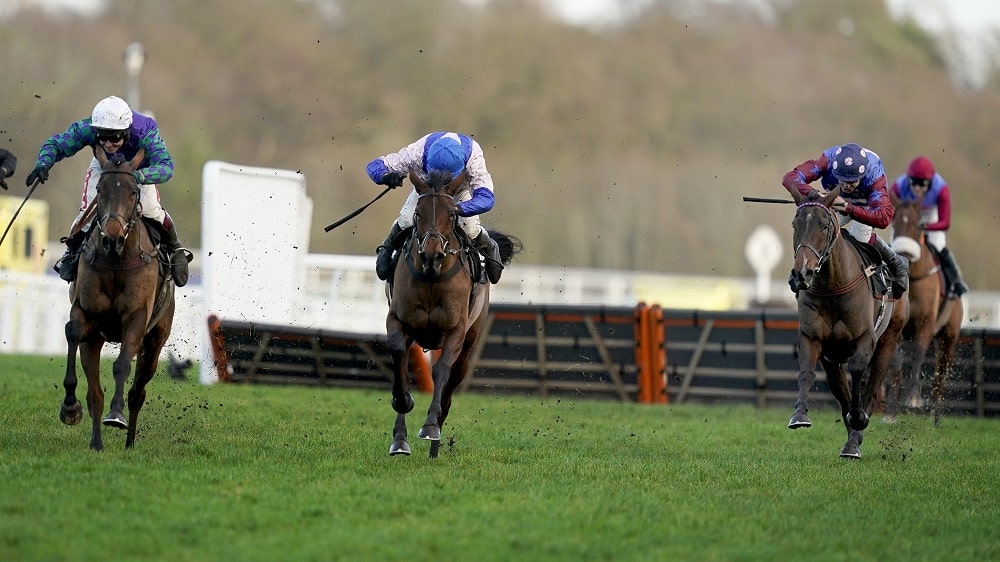 The feature race on day one of the Winter Carnival at Newbury on Friday, 26 November is the 3m Grade 2 Ladbrokes Long Distance Hurdle (3:00). Past winner Paisley Park tries to regain his crown in this staying race and comes into it off the back of a run unlike when successful two years ago.

Although all leading horse racing betting sites have no hesitation making him favourite, only two of the last eight market leaders delivered in this race. Multiple winners of the Long Distance Hurdle have been common. The great Big Buck’s took this in four consecutive years (2009-12). Before that, Inglis Drever hit a hat-trick (2005, 2006 and 2007).

Baracouda and Unowhatimeanharry are other staying greats that enjoyed more than one success at Newbury, so it’s possible. Race fitness for Paisley Park and those others who contested the West Yorkshire Hurdle last month may not be an obvious advantage. There is a 50-50 split with the last eight Long Distance Hurdle winners either landing the spoils on reappearance or turning up on the back of a run.

All but one in this year’s field of six has already been out this season, so there are no excuses. It usually takes a horse with an official rating of 150 or higher to win the Long Distance Hurdle yet there are a couple of mares in this line-up. Of the last seven renewals, all but one went to horses aged six, seven or eight. Stats and trends only tell us so much, so let’s see who SportsLens experts fancy…

Why Paisley Park is favourite in the Long Distance Hurdle betting

Emma Lavelle has really been put on the map as a trainer by Paisley Park, who won this in 2019. That aura of invincibility has gone, however, as the nine-year-old Oscar gelding has just two victories in seven subsequent starts. Always vulnerable to a flat spot, as he has aged, Paisley Park takes longer to get over it.

He needed every yard of this trip on desperately heavy ground when regaining the Long Walk at Ascot last Christmas. Paisley Park stayed on into second behind Thyme Hill in the Long Distance Hurdle 12 months ago, but turned the tables on that one in Berkshire. Philip Hobbs’ runner misses Newbury this term following a disappointing run in France earlier this month.

However, this is no gimmie for Paisley Park. In three starts during 2021 so far, he has either finished a keeping on third or been pulled-up. It’s clear that Lavelle’s stable star simply isn’t the force of old. She reaches for cheekpieces in the hope they will spark Paisley Park back into life.

He does meet Wetherby conqueror Indefatigable off 6lb better terms here, though. It does give Paisley Park every chance of reversing form with around five lengths to find. It’s for that reason Betfred are 15/8 about him regaining his crown. Paisley Park shapes like he wants even further these days, though, and it could be a case of either win or try fences with something like the National Hunt Chase a potential target.

Back Paisley Park with Betfred

Despite previously disappointing over 3m, Indefatigable may have run a career best when landing the West Yorkshire Hurdle last time out. Like Paisley Park at Lavelle’s yard, this eight-year-old mare by Schiaparelli flies the flag for the Paul Webber stable. Indefatigable was behind a couple of re-opposing rivals in the Liverpool Hurdle at Aintree on her penultimate start of last term but had a long campaign.

Connections tried her over different tips during the 2020/21 season and perhaps the nippy, turning track at Kempton didn’t suit her. Indefatigable ran fourth to Black Tears in the Mares’ Hurdle at the Cheltenham Festival, and that form received a boost this week. My Sister Sarah, some seven lengths behind in fifth, stepped up in trip and landed the same 3m Listed contest at Kempton in which Indefatigable disappointed 12 months ago.

Following a summer break, Indefatigable has won both her starts breaking her maiden tag on the Flat. After staying on at Pontefract, she landed a first Grade 2 success at Wetherby. Although penalised for that and meeting those in-behind her off worse terms, Indefatigable remains unexposed as a stayer. Odds of 100/30 with William Hill suggest she can have a say in the finish again here.

Bet on Indefatigable with William Hill

Irish trainer Paul Nolan has never had a runner at Newbury until now with Mrs Milner heading over from the Emerald Isle for a tilt at the Long Distance Hurdle spoils. This six-year-old daughter of Flemensfirth has really improved this year. After qualifying for the Pertemps Final at Cheltenham, Mrs Milner took a tumble at the Dublin Racing Festival.

She proved no worse for her Leopardstown fall, however, when landing the big Grade 3 staying handicap hurdle on Ryanair Chase day. Mrs Milner bolted up by five lengths in the Pertemps Final. Only a stone bruise kept her out of a crack at the highest level and the Champion Stayers Hurdle at the Punchestown Festival.

Mrs Milner looked as good as ever when following-up in a Listed contest at Limerick last month. Her record fresh was mixed, so it was a good performance. Both the second and third mares home in-behind her over an extended 2m 6f came out and won their next starts, so the form isn’t too shabby.

It may be that Mrs Milner still hasn’t reached her ceiling as a stayer. Given her stamina laden pedigree and the fact that she gets weight all-round from the Long Distance Hurdle field, she looks well worth a crack at this level. That’s why Bet365 are 6/1 about Mrs Milner, who can keep on improving and rates a great each way alternative.

Bet on Mrs Milner with Bet365

On adjusted ratings, Thomas Darby comes out level with Paisley Park. However, Olly Murphy’s runner met the favourite off these terms at Wetherby and finished seven lengths behind. Thomas Darby may be entitled to strip fitter for that reappearance run yet does have something to find.

Murphy tries a first-time tongue tie, suggesting there may have been issues with the eight-year-old son of Beneficial’s breathing. Thomas Darby hasn’t won beyond 2m outside of handicap company either. The Long Distance Hurdle demands more, so others hold greater appeal. Thomas Darby is also a 6/1 shot with BoyleSports here.

Lisnagar Oscar hasn’t replicated his shock 2020 Stayers’ Hurdle success in six subsequent starts. Trained by Rebecca Curtis, it looks as though this eight-year-old son of Oscar pulled off a fluke. He finished a disappointing seventh in this 12 months ago, so a top-price 13/2 with Bet365 doesn’t look like value.

On The Blind Side won a Listed handicap on reappearance last term and meets Mrs Milner off 6lb better terms. Trained by Nicky Henderson, this nine-year-old only won one of six subsequent starts. On The Blind Side has been frequently found wanting at this level, so that’s why he has double figure odds for the Ladbrokes Long Distance Hurdle here.