Liverpool manager Brendan Rodgers vowed to make full use of the money received from Luis Suarez’ sale to Barcelona and didn’t waste any time in delving into the transfer market to sign QPR striker Loic Remy.

Last night reports emerged that Liverpool have agreed a £14m deal to sell Fabio Borini to Sunderland. It became very clear that the Reds have had already lined up a deal and it came true soon after, with Sky Italia claiming that Liverpool have sealed a deal for Remy, who will join on a five-year-contract. 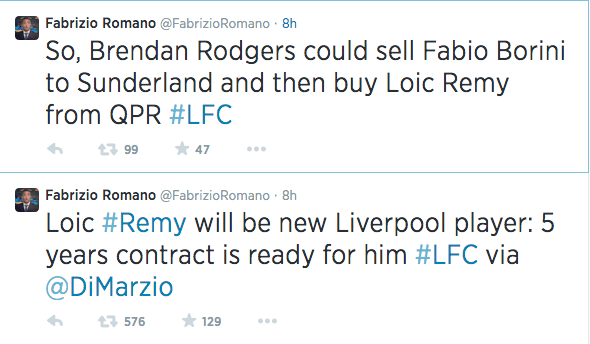 The 27-year-old, who played the last season on loan at Newcastle United, was thought to be a reported target of Arsenal, but it seems, Liverpool have jumped in quickly to secure his services.

French magazine Le 10 sport has also published an Exclusive story on Remy where they echo on the similar lines reported by Sky Italia.

Remy could become the fifth major signing of the season for Liverpool, after the Reds have already captured Rickie Lambert, Emre Can, Adam Lallana and Lazar Markovic. The Frenchman would cost around £8m.