Liverpool’s 1-0 loss to Chelsea in extra-time on Tuesday night was only their second in their last 17 matches. Aside from losing to the league leaders in the cup midweek, Liverpool’s excellent form has five points off the UEFA Champions League places at the start of the weekend.

Brendan Rodgers’ side are one point below their opponents West Ham, although their were nine points between these two on Christmas Day. The Hammers’ 3-0 win over Hull City two weeks ago saw Sam Allardyce’s side end a run of four matches in which they’d only collected two points.

The big news for Liverpool fans in this match is that Daniel Sturridge is to make his return to the Liverpool lineup having not played since 31 August due to injuries. It has yet to be confirmed whether he will start or make an appearance from the bench but Liverpool fans are certainly anticipating his return.

Brad Jones is still yet to recover from a thigh injury that forced him off after 15 minutes on Boxing Day. Simon Mignolet may have also won the number one spot back in recent weeks – the Belgian put in a solid performance versus Chelsea last time out and has kept three clean sheets in his last five Premier League games.

Mamadou Sakho was forced off with a back injury on Tuesday and should the French defender not be fit for Saturday we could see Glen Johnson or Dejan Lovren back in the starting lineup. Johnson made his return in replacing Sakho against Chelsea.

Kolo Touré is with the Ivory Coast at the African Cup of Nations and Jon Flanagan has been injured all season.

Steven Gerrard is a slight doubt with a hamstring injury otherwise Brendan Rodgers has no one injured issues.

Sam Allardyce is sweating on a few knocks in defence. James Collins has a back injury and fellow centre-back James Tomkins is carrying a knock. Carl Jenkinson is 50-50 in terms of being fit for the game.

Cheikhou Kouyaté has finally returned from the African Cup of Nations – it now depends on whether he is fresh to play and whether Sam Allardyce will play him after he temporarily disappeared during the week. 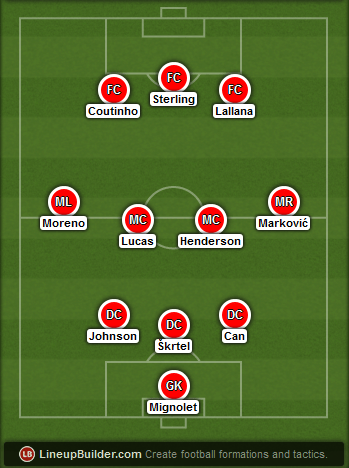 We’re not expecting Brendan Rodgers to rush Daniel Sturridge in front the start but rather introduce him from the bench. The Northern Irish manager has Adam Lallana, Raheem Sterling and Philippe Coutinho to pick from as his front three. Should Steven Gerrard not be fit to play two games in a week, Jordan Henderson can move into the middle and Lazar Marković play the right wingback role. 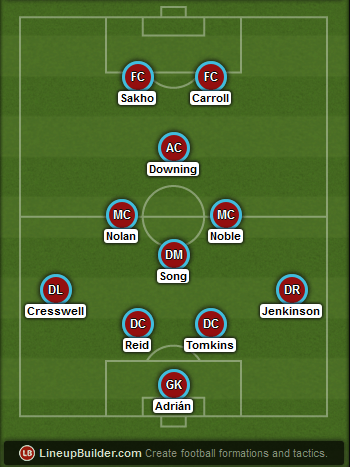 James Tomkins or James Collins will partner Winston Reid in the centre of the West Ham defence. Stewart Downing plays in the playmaker role behind the two strikers and in front of a trio of central midfielders. He and Andy Carroll are set to face their former side whom cost the Reds a combined £55 million back in 2011.

Philippe Coutinho vs Carl Jenkinson
Liverpool’s Brazilian playmaker has been in good form for a while now. Good at picking the ball up front deep and running at defenders. Finds space in the midfield, creates chances and likes a pop from around the edge of the penalty area. It will be a tough test for young full-back Carl Jenkinson but the on-loan Arsenal defender has played well this season.

Adam Lallana vs Aaron Cresswell
Philippe Coutinho is a difficult proposition cutting in front his left on his stronger foot and Adam Lallana too is going to be a difficult proposition for the West Ham defence on the opposite flank. The England international will also be looking to exploit any space left between the midfield and defence. He’s only one goal behind Steven Gerrard as the club’s top scorer this season and can be a real nuisance on his day. Aaron Cresswell and Winston Reid need to keep their wits about them.

Stewart Downing vs Lucas
Lucas had an excellent game in both legs of the League Cup semi-final against the likes of Oscar and Cesc Fàbregas. He’ll need to be at the races this weekend too as Stewart Downing is in form this season with the Hammers. Only three more players have set up more goals than the former Red so far this season and Downing also has five goals to his name – as many as Liverpool’s top scorer. Liverpool’s Brazilian defender will also be supported by the energetic Jordan Henderson.

Prediction: Liverpool 2-1 West Ham
Liverpool are in the better form of these two and we think they’ll get the job done. They have two playmakers and goal threats out wide that may be too much for this West Ham defence that has not performed well on the road this season. Brendan Rodgers also has Daniel Sturridge to call upon and he’s a goalscorer.