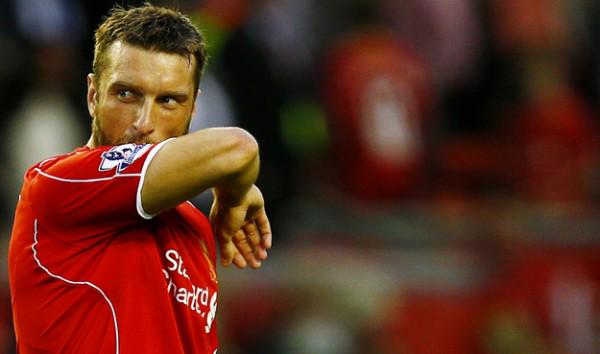 Liverpool’s 2-2 draw with Ludogorets on Wednesday ended a four-game losing streak for Brendan Rodgers’ side in all competitions.

It was also the first time since beating Swansea City at the end of October that the Reds had scored more than one goal in a game. A surprise defeat at Crystal Palace last weekend leaves Liverpool five points off the UEFA Champions League places and only four points above the relegation zone.

Stoke City’s inconsistent season continued with a surprise loss at home to Burnley.

Daniel Sturridge is due back next month whilst Mario Balotelli could return this weekend after missing the last two matches with a groin injury. However, the Italian is still without a Premier League goal for Liverpool and Rickie Lambert has scored early goals as his replacement in the starting lineup over the past two games.

Defenders Mamadou Sakho, José Enrique and Jon Flanagan all continue to be sidelined. The Liverpool defence has kept just two clean sheets in 19 games in all competitions this season.

Mark Hughes has one of the longest injury lists to deal with heading into the final weekend of November.

Asmir Begović, Phil Bardsley and Geoff Cameron have all missed training this week due to a sickness bug, making the three first-teamers a doubt for Saturday’s match at Anfield. They have already been without Robert Huth all season and the German is not due back this weekend either. Both Erik Pieters and Marc Wilson are expected to return after missing last weekend’s defeath, otherwise Hughes would be very short of options at the back.

Former Liverpool loanee Victor Moses has been ruled out until the New Year with a thigh injury, Glenn Whelan is also injured and Oussama Assiadi is unable to face his former club.

Striker Peter Odemwingie is also injured, but Hughes does have Peter Crouch, Mame Biram Diouf and Bojan all available up front. 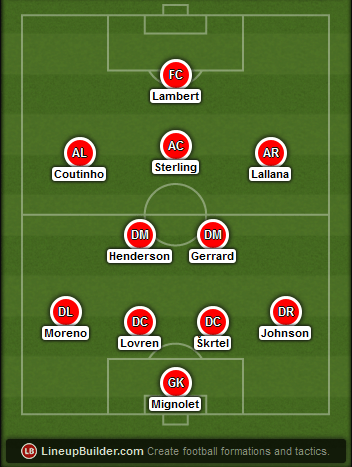 We’ve gone with a recall of Alberto Moreno at left-back and Glen Johnson back at right-back after switching the defence resulted in three goals conceded at Crystal Palace last weekend. Surely Rickie Lambert maintains his place up front whilst this is Brendan Rodgers’ favourite midfield personnel. 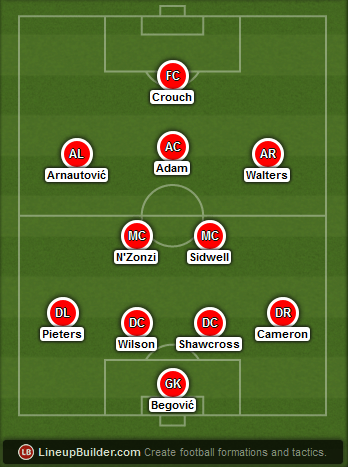 Whichever back four starts for Stoke this weekend they have not had much training together over the past week or so due to injuries. They have a powerful duo in front of the back four who may want to slow the pacey Raheem Sterling and skilful Philippe Coutinho down.

Charlie Adam hasn’t played a lot recently but we think he’ll start against his former club.

Rickie Lambert vs Marc Wilson
The Stoke City centre-back has only played 25 minutes in the past two games combined due to a hamstring injury. If Marc Wilson is indeed fit to start this one he should be tested and tested early up against Rickie Lambert who has scored in the opening eight minutes of each of Liverpool’s past two games.

Raheem Sterling vs Steven N’Zonzi
Raheem Sterling has certainly lost his form over the past month or so but his pace could be a great weapon in this match. The Stoke City defence isn’t the quickest in the world so the England international may fancy his chances of doing some dodgy by either running at them or running onto a through ball. We should at least be able to expect Sterling to win some free kicks in opposition territory if nothing else comes off for him.

Peter Crouch vs Martin Škrtel
Stoke City’s joint-top scorer this season has to fancy his chances of scoring against his former club this weekend. Peter Crouch may have only three goals this season but the home side have kept only two clean sheets and have been poor at defending set pieces also. Can the visitors score?

Prediction: Liverpool 2-1 Stoke City
With the injuries and illnesses in the Stoke City camp this is a great opportunity for Liverpool to get their first win of November. Admittedly they were playing in Bulgaria on Wednesday but the Potters could be without a whole host of defenders and are one of the league’s lowest-scoring teams.