Liverpool welcome the reigning UEFA Champions League winners to Anfield on Wednesday as they look to add to their tally on three points from two matches.

Real Madrid have won their opening two matches and would go along way towards winning the group by picking up three points in England on Wednesday.

The Premier League side have not looked so convincing to start the season although their stoppage time victory at Queens Park Rangers on Sunday was the first time Brendan Rodgers’ side have enjoyed back-to-back victories this season.

Daniel Sturridge picked up another injury last week that is going to keep the England forward out of both ties with Real Madrid over the next fortnight.

Jon Flanagan remains sidelined, whilst Mamadou Sakho is a doubt.

Fábio Coentrão and Jesé are also ruled out through injury. 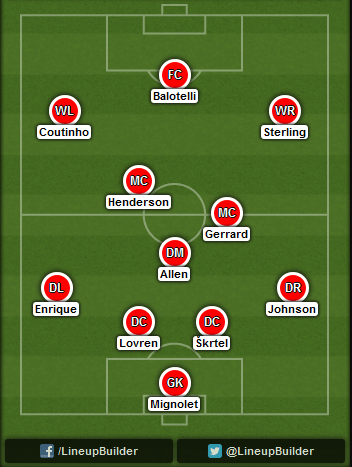 This looks like the strongest team available to Brendan Rodgers. Javier Manquillo is an option at right-back and Alberto Moreno on the left. Mario Balotelli has been a big disappointment so far – let’s see if he can step up against the big clubs. 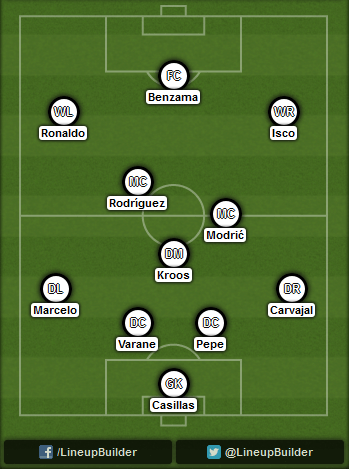 Sergio Ramos’ absence let’s the talented youngster Raphaël Varane play alongside Pepe. Real Madrid’s weakness is defending – none of their central midfielders are defence-first players. They look to dominate possession and outscore opposition and this team win many of those battles. Toni Kroos is hard to shake off the ball and he works the hardest in this team off the ball to win it back. Real Madrid have scored 30 goals in their eight league games and seven in their two Champions League games.

Cristiano Ronaldo vs Glen Johnson
Whoever Brendan Rodgers selects at right-back they’re in for a torrid time. Javier Manquillo has experience with Atlético Madrid last season but it wasn’t a good one. Cristiano Ronaldo is in scintillating form this season and closing in on Raúl’s all-time Champions League goalscoring record. You know what Ronaldo is capable of – cutting in from the left and shooting from any distance, running into the middle to collect passes or attack crosses. Dangerous at direct free kicks too. Can Liverpool keep him off the scoresheet? Good luck.

James Rodríguez vs Joe Allen
Real Madrid’s big summer signing is great in possession. He has set up a few goals this season, created many more chances and likes a shot at goal himself, already scoring a stunner this season. There are plenty of playmakers for Liverpool to be careful of; Toni Kroos, Isco and Luka Modrić included, but look out for Rodríguez behind Karim Benzema.

Prediction: Liverpool 1-3 Real Madrid
Defending is not the strength of either side so we could be in for a shootout.  However, Liverpool have not looked too good going forward without Daniel Sturridge and Real Madrid have been scoring for fun so Brendan Rodgers may want to consider a more defensive-minded side to prevent the La Liga side running away with it.