Liverpool ended 2014 on a high with back-to-back wins including the 4-1 thrashing of Swansea City at Anfield.

As a result, Brendan Rodgers’ sides have moved up to eighth position to start the New Year and victory over bottom of the table Leicester City would see them close the gap on West Ham and Tottenham directly above them.

Leicester ended a 13-game streak without a win by beating Hull City 1-0 on Sunday to get them back within touching distance of safety. They will have had an extra day’s rest compared to the hosts during a short period.

Brad Jones is still a doubt and it will be interesting to see who Rodgers goes with when he is fit.

Martin Škrtel picked up his fifth yellow card and misses this game through suspension. Glen Johnson and Dejan Lovren are also out injured but should just mean bringing in Kolo Touré and being lightweight on the bench.

Joe Allen and Suso are still both out but this doesn’t cause too many problems. Jordan Henderson was more effective in the middle versus Swansea than he had been on the right previously.

Daniel Sturridge is still out so Rodgers can stick with his 3-4-3 formation that has Raheem Sterling up front.

Kasper Schmeichel is a long-term injury but statistically Ben Hamer has been much better between the sticks for the Foxes.

Paul Konchesky is suspended after being sent off late at Hull. Matthew Upson has been injured all season.

Andy King is also injured making this one of the most-depleted squads Nigel Pearson has had all season… four absentees. 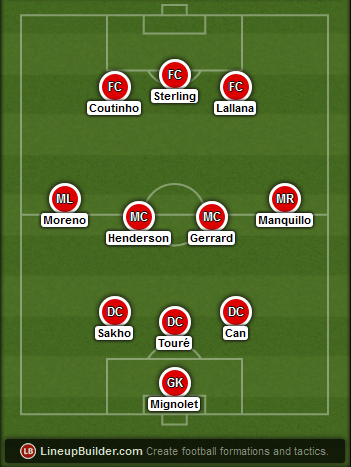 The Liverpool back three doesn’t look strong at all on paper but their midfield dominates the game in this formation and that’s essentially how they defend. Brendan Rodgers employed full-backs as wingbacks versus Swansea with good success. Quite amazing to think Raheem Sterling wasn’t amongst the four goals last time out but you’d have to favour the young striker to breach the Leicester backline at least once on New Year’s Day. 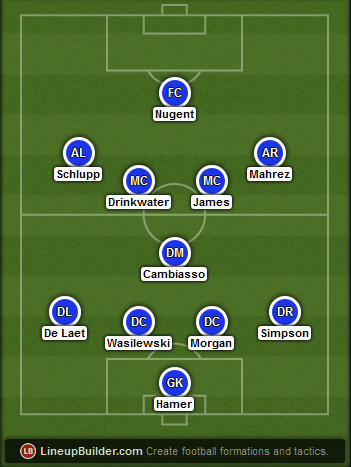 Nigel Pearson has reverted to a 4-1-4-1 formation and his defence has conceded fewer goals in recent weeks with Ben Hamer in goal and the experienced Marcin Wasilewski alongside Wes Morgan. Even with Paul Konchesky suspended, it’s still a slow back four. David Nugent started the last two games and he’ll probably start this one as Leonardo Ulloa relies on playmakers around him to create him simple shots and you can’t expect Leicester to have too many of those at Anfield.

Raheem Sterling vs Wes Morgan
Wes Morgan may lead the Premier League in blocked shots but the old defender doesn’t have the legs to last with Raheem Sterling. Expect the Liverpool striker to see one-on-ones or at very least, some through balls to put him beyond the defence out wide where he can create chances. His decision making hasn’t been the best but he’s facing Ben Hamer as the last man there’ll only be one choice for him to make.

Philippe Coutinho vs Danny Simpson
Philippe Coutinho has had a good Christmas and that looks set to continue versus Leicester City. The Brazilian can be expected to be another contributing factor to a Liverpool win on Thursday as he faces up against Danny Simpson with Wes Morgan inside the right-back.

Adam Lallana vs Ritchie De Laet
Adam Lallana scored a brace in Liverpool’s 4-1 thrashing of Swansea City last time out and the England international could fancy his chances versus Leicester City to add to his tally. Starting on the right wing, he drifting inside to find space. It probably won’t be Ritchie De Laet’s job to mark him when he’s in the middle but there’s a good chance he can drop in the space between defence and midfield and cause some confusion.

Prediction: Liverpool 3-1 Leicester City
Liverpool appear to be turning the corner in their last couple of matches and despite the day’s less rest we think they will continue with a third success victory in this one. We’re expecting the Reds to score a few and as their defence isn’t great on paper we think the visitors will net a consolation. At least we’re being generous enough to think Leicester will get that much out of this game.