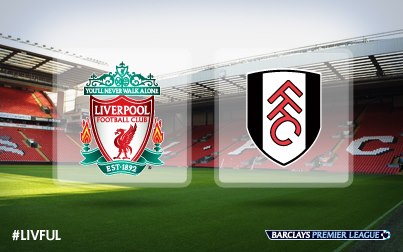 After suffering a shock 2-0 defeat at the hands of Arsenal last week, Liverpool are looking to bounce back strongly in the league. And they couldn’t have found a better opponent to strike back than Fulham – a side that have suffered three consecutive defeats in their last three matches.

Liverpool don’t have side distractions in the form of European commitments this season. So, Brendan Rodgers can field his best 11 week in week out, giving adequate rest to his key players. The new 3-4-1-2 formation is still in its experimentation stage as against Arsenal we saw, teams with more creative players are capable of exploiting the defensive weaknesses. However, the Reds should not face any such problems against Martin Jol’s side on Saturday though.

The Reds are heavily dependent on Luis Suarez and Daniel Sturridge – the SAS partnership – to score goals for them and against Fulham it won’t be any exception. Luis Suarez bagged a hat-trick in the last home game and he is at 9/4 with Ladbrokes to be the first goal scorer of the match. His strike partner Sturridge is at 3/1 with Ladbrokes to do the same.

Fulham have had an inconsistent start to their season while Martin Jol’s future has also come under speculation. The Cottagers have a wretched away record overall. They have registered only 15.5% victories of their Premier League away games while have lost by 2 or more goals in 5 of their previous 9 trips to top-six teams. Thus, all stats point towards a comfortable home win for the Reds and the bookies certainly predict that as well. The Reds are 1/4 with the Ladbrokes to win against Fulham on Saturday.

Brendan Rodgers has declared that skipper Steven Gerrard is fit enough to play the game. Like wise, right-back Glen Johnson who missed the last match with a jaw infection, is back again to face Fulham on Saturday. Spaniard Jose Enrique could make a start as well, after a month on the sidelines with a knee problem.

Fulham defender Sascha Riether starts his three match ban after his stamp on Manchester United youngster Adnan Januzaj was retrospectively punished. Skipper Brede Hangeland and Bryan Ruiz, both will have fitness test ahead of the match.

Prediction: A comfortable 3-0 victory for Liverpool.