The first Merseyside derby of the season kicks off the Premier League action on Saturday lunchtime with Liverpool playing hosts.

There were two action-packed games between these sides last with Liverpool taking four points and scoring seven goals – the most they have scored in a single Premier League season versus their neighbours.

After five games this season both Liverpool and Everton sit in the bottom half of the table and both will be looking to kick start their season with a victory in the derby.

Liverpool head into this match following a penalty shootout victory over Middlesbrough in the Capital One Cup on Tuesday. Brendan Rodgers included a couple of first-team players in that match whom can be expected to start on Saturday – Simon Mignolet, Javi Manquillo and Raheem Sterling. Both Adam Lallana and Lazar Marković started whom will be pushing to start the weekend’s fixture.

Everton were hammered 3-0 at Swansea City in their Capital One Cup defeat on Tuesday. Tim Howard, Sylvain Distin and Aiden McGeady all started.

The Reds are on back-to-back losses in the Premier League whilst Everton were surprisingly beaten at home by Crystal Palace last weekend.

Full-backs Glen Johnson and Jon Flanagan remain absent through injury. Joe Allen is also sidelined and Emre Can is expected to be out for another month. Both Philippe Coutinho and Jordan Henderson are slight doubts for Brendan Rodgers’ side. Daniel Sturridge has an outside chance of making a return earlier than expected.

Steven Pienaar could return for the Merseyside derby after missing the last three league games after picking up an injury very early on against Arsenal in their second game of the season.

Ross Barkley is a long-term absentee for Roberto Martínez’s side. 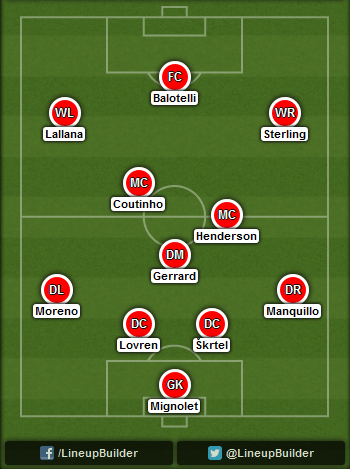 We are predicting Brendan Rodgers sticks with the same defence that played against West Ham. This is his preferred midfield three whilst Raheem Sterling will either start on the right or behind the striker. Adam Lallana or Lazar Marković to start on the left. 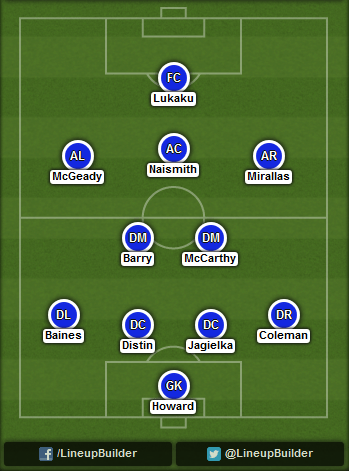 This is Roberto Martínez’s favourite eleven with Ross Barkley out injured. Several players were rested midweek so I would expect the Spaniard to name this team at Anfield on Saturday. The only change that would not be considered a big surprise would be if John Stones comes in.

Raheem Sterling vs Gareth Barry
Raheem Sterling is Liverpool’s top scorer with three goals this season and has scored their only goal in the two Premier League matches since the international break when Daniel Sturridge got injured. Gareth Barry has not offered great protection in front of his back four this season – Everton have shipped a league-high 13 goals in their opening five matches. Whilst Liverpool have been very poor in the final third this month, Sterling poses a real threat to the Toffees’ defence and the home side should fancy their chances scoring in this one.

Steven Naismith vs Martin Škrtel
Martin Škrtel made his return last weekend only to see his side ship three goals at West Ham. Goalkeeper Simon Mignolet has kept only one clean sheet in his last 11 Premier League games to show how fragile the Liverpool defence has been. Dejan Lovren has not looked so secure following his £20 million move from Southampton. Steven Naismith has started the season with three goals in five appearances. The Scotland international’s clever moment should see him find some space in and around the Liverpool penalty area.

Mario Balotelli vs Phil Jagileka
The Everton defence has conceded at least two goals in four of their five Premier League matches this season. Mario Balotelli’s only goal for Liverpool so far came in the UEFA Champions League. We know what the Italian striker is capable of and has scored in a number of big games in the past. With the Everton defence performing so badly this season perhaps this will be the game the £16 million summer arrival from AC Milan stamps his authority.

Prediction: Liverpool 3-2 Everton
Liverpool have had the better in the Merseyside derby of late but two teams defending badly and out-of-form this match could go either way. We’re expecting entertainment and goals at Anfield to start the Premier League weekend and we’re going with Liverpool to pick up three points. They’ve won this fixture several times in recent seasons and their pace against the Everton defence looks like being the difference.