Super Sunday concludes with a big game as Liverpool host Arsenal in the penultimate Premier League action before Christmas.

Liverpool head into the weekend in 11th position, five points behind Arsenal whom they finished above last season.

Arsenal have won three of their last four in the Premier League, whilst Brendan Rodgers’ side have failed to score in their last two.

Mario Balotelli is serving a one-match suspension whilst fellow striker Daniel Sturridge is still out injured. This leaves only Rickie Lambert and Fabio Borini as options once again, although Raheem Sterling was pretty useful in that role for 45 minutes last weekend, despite missing three one-on-ones.

Kolo Touré came back from a groin strain last weekend so is available to start in the centre of defence. Full-backs Glen Johnson and Jon Flanagan are sidelined.

Brendan Rodgers is once again only without Suso in midfield.

Despite having one of the biggest midfield’s in the league, Wenger is running short on options for the festive season with a long list of injuries. Mesut Özil, Jack Wilshere, Aaron Ramsey, Mikel Arteta, Theo Walcott, Tomáš Rosický and About Diaby are all out. Alex Oxlade-Chamberlain is also a doubt.

Olivier Giroud is fit and scoring again, allowing Danny Welbeck to drop back to the left wing to support with the injury crisis in midfield. 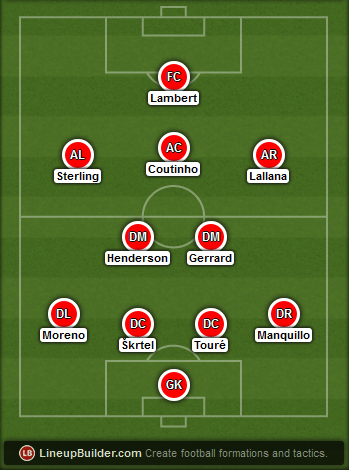 Brendan Rodgers may want to go with the aerial threat of Rickie Lambert up front and have Raheem Sterling a bit deeper as a counter-attack threat. Steven Gerrard was largely ineffective in the number 10 role against Manchester United and we think he’ll drop back, allowing the quicker attacking midfielders to start and offer a threat on the break. 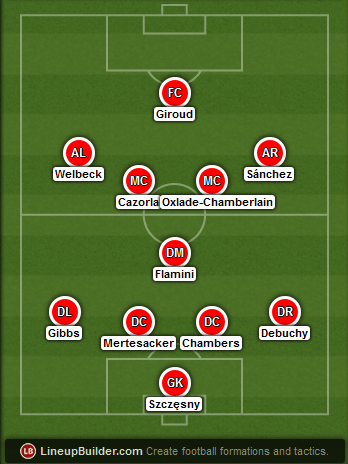 The Arsenal starting XI virtually picks itself with the amount of injuries at hand. Expect the substitutes’ bench to contain a youngster or two as Wenger has limited first-team players available to name 18 players in the matchday squad.

Alexis Sánchez vs Alberto Moreno
Alberto Moreno made Antonio Valencia look world class last weekend and not too many full-backs have done that. The Spanish defender has shown his potential going forward but doesn’t appear to have grasped the concept of defending. That’s bad news for Liverpool if he starts as Alexis Sánchez has been one of the players of the season over on the right wing. The Chilean forward should enjoy a successful day versus this Liverpool defence and the left-back in particular.

Santi Cazorla vs Steven Gerrard
The Manchester United midfield, notably Juan Mata, had an excellent game versus the Liverpool midfield and the Arsenal unit has the same potential. Santi Cazorla is capable of pulling the strings in the middle and is also a goalscoring threat. Don’t be surprised if the Spaniard puts in a good performance on Sunday.

Prediction: Liverpool 1-2 Arsenal
Last week was one of the lowest in Brendan Rodgers’ time at Liverpool and we don’t expect this weekend to ease up on the Northern Irish manager. Despite an incredible list of injuries we think Arsenal will pull through this one and pick up three points on the road.