According to reports in Spanish newspaper Mundo Deperotivo, Premier League giants Manchester United, Liverpool and Arsenal are all interested to sign €22m Dutch World Cup star Daley Blind from Ajax. Barcelona are also serious about their interest in the player. 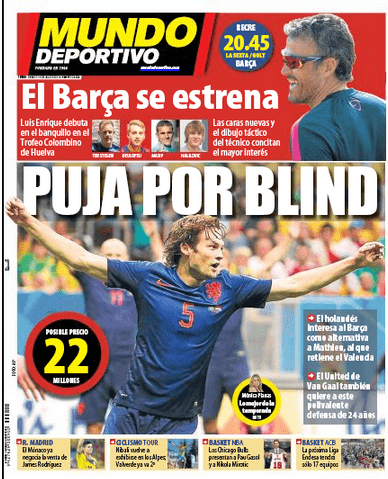 For Barcelona, Blind however is a second option if they aren’t able to sign Jeremy Mathieu from Valencia. Liverpool, Arsenal and Dortmund are mentioned as interested too, but United have been the most insistent since new manager Louis Van Gaal knows and appreciates him. Moreover, the defender’s father Danny Blind has also been Van Gaal’s assistant. 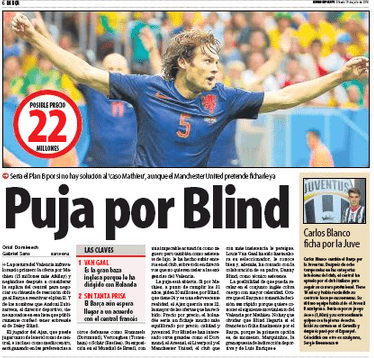 A move to the Red Devils might shape up earlier than a switch to Barcelona as the Catalan club’s first option for now is Paris St Germain’s Marquinhos, who is admired by new manager Luis Enrique.

German club Borussia Dortmund also have pursued their interested in the player but Ajax want €22m for the 24 year old.

As we saw in the World Cup, the Dutch side under Van Gaal was immensely versatile, while Blind can play in a wide range of positions, something and would fit into Van Gaal’s footballing philosophy at Old Trafford. A player of Blind’s quality would seamlessly fit into the Red Devils starting eleven and would provide much solidity in midfield and would also be able to screen the back four playing in the central defensive midfield role.