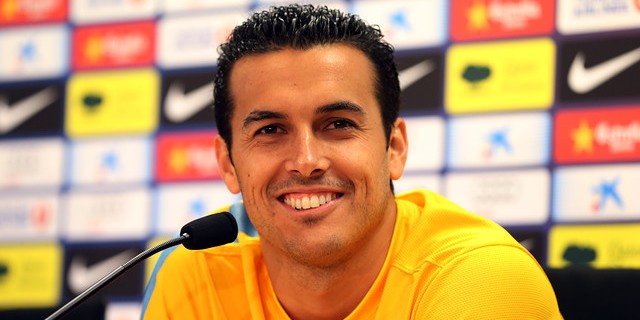 Barcelona winger Pedro has insisted he wants to remain in the Camp Nou, dealing a potentially fatal blow to Liverpool’s hopes of luring the Spaniard to the Premier League in January.

Brendan Rodgers’ side, as well as Arsenal, had been linked with a move for the slippery attacker, but his words on Friday (via Marca) seem to have ended the speculation concerning his future,

“I’m happy and relaxed at Barça. I plan to remain at this club and at the end of the season be able to say that things have gone well for me,” said the forward.

“I hope to stay here and win the league. Our goal is to not drop any more points and be challenging for silverware at the business end of the season.”

Meanwhile, Chelsea have been encouraged in their pursuit of Porto centre-back Nicolás Otamendi.

He told Portuguese newspaper Record: “My mind is at Porto and continuing to play here. I want to do my job to the best of my ability. Porto draws attention around the world and these rumours still exist.

“But I’m glad they speak well of me, that means I do things well. If an opportunity presents itself, I’ll think. I will continue to help Porto.

“I do not think changing clubs in January would harm me in the context of the World Cup. I always want to do my best, wherever I play.”

The Argentine defender had been strongly linked with a move to Stamford Bridge last summer, and has also had a whole host of European powers keeping tabs on him, including the Blues’ Premier League rivals Man City.

With Jose Mourinho concerned about the amount of goals his side are conceding, it would be no real surprise if he dipped into the January transfer market for reinforcements in this area.

What do you think? Should Mourinho sign a defender in January? Was Pedro worth a look? Let me know in the comments below…