Benfica’s Lazar Markovic is one of the most sought after young players in Europe and Liverpool are believed to be pole position to land him at this point.

In March, we reported that the Liverpool scouts are watching him regularly, with head scout Barry Hunter hugely impressed with what he saw. 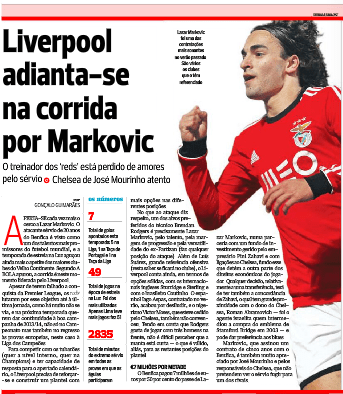 The 20-year-old has had a great season with Benfica and has a contract till 2018. Liverpool were told to pay €35m to secure his services, who is also a reported target of Chelsea. The Blues have an upper hand over any of their rivals, as they can seal the deal for only €15m, as the London club have a close association with Benfica.

A Bola reports today that The Reds are looking to strengthen their squad to compete on all fronts next season and Markovic is seen by Brendan Rogers as one of the players who could take the squad to the next level.

Benfica only own 50% of the player’s pass, the other half being owned by agent Pini Zahavi, who has strong connections to Chelsea.

Having seen Chelsea hijacking few deals last season, can Liverpool show some ambition and lure the player with Champions League offer? Have your say below…