Before kick-off, that scoreline would been considered unlikely – but as hoped by Liverpool fans, Rafa’s men rose to their next European challenge and produced as good a display as could be hoped for (considering the buildup) to beat 10-man Inter Milan 2-0.

The scoreline hardly tells the whole story though.

An aggressive start by Liverpool countered by the calm control of Inter. A succession of ‘simulations’ by Steven Gerrard and Fernando Torres, with Gerrard getting Chivu booked and Torres getting Materazzi 2 yellows, culminating in Materazzi’s ejection from the game in the 30th minute. Ibra and Cruz diving but getting nothing out of it. Inter increasingly going into their shell and focusing on effective defense, which they did alertly and without too much trouble.

Liverpool’s attacking play in the second half as they finally started stretching wide with the full-backs pushing way forward. The Vieira handball claim – a 50/50 call that the linesman couldn’t be absolutely sure of. The Ivan Cordoba injury that left 2 makeshift center-backs manning Inter’s central defence (one of them, Burdisso, hadn’t played in the Champions League for an year). The Kuyt goal that game after a tiring Inter defense let the ball bounce in the penalty box. The Gerrard goal, a rare instant where Inter players failed to close him down and Gerrard’s shot went inch-perfect, hitting the post and going in giving Cesar no chance at all.

The match tells us different stories, and it would pay to listen to all of them if one wants an fair and accurate prediction of the second half.

Liverpool are still one of the big four in England (shame on you for doubting that), if only based on their European performances. They have an excellent chance against Inter now and you can expect the roles to be completely reversed in the second leg with Inter on attack and Liverpool playing the counter.

Wouldn’t it be great if Rafa pushed his team forward to get that one goal which would leave Inter needing 4 and then defend? Does Rafa have the courage to take this risk? Do Liverpool have the courage to risk this, when they couldn’t break down 10 men playing at Anfield for 55 minutes?

The story is Inter’s defence, and don’t let the two goals fool you – there’s a good chance that with Cordoba on the pitch (instead of going off injured in the 73-74 minute), Inter could have held on. Assuming that Inter will have Cordoba back for the return leg, this defence will be quite hard to break down and it will be tough for Liverpool to get an away goal, so you might see Rafa defend to the hilt after all.

The story is the ref, whose contribution in shaping the course of the game cannot be ignored. There’s little point in blaming him because both set of players tried to con him (although the home side succeeded with far more significant results) and he wasn’t responsible for not giving the penalty as it was the linesman’s call at the time.

The story is that domestic cup and league form has no bearing on European form, and vice versa, so it would be crude to make assumptions based on how Inter do in the Serie A or how Liverpool play in Europe.

The story is Liverpool’s ability to keep possession which helps them greatly in tactical battles and it will be their biggest weapon when they go away for the second leg. 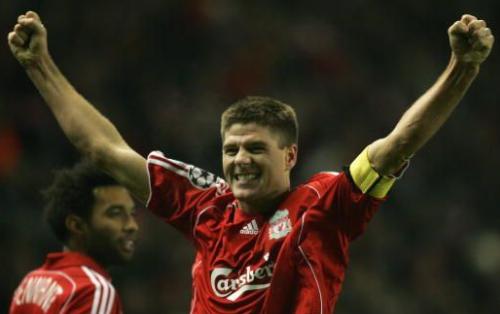 What are the chances of Liverpool going through to the quarter-finals now?