Liverpool’s representatives flew to Spain, better to say Sevilla, yesterday to conclude a deal for striker Iago Aspas. And it was a successful trip. Sevilla announced yesterday that they have agreed a deal to sign Iago Aspas on loan, with a view of making it permanent next season. 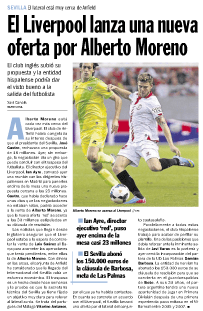 Needless to say, Liverpool officials didn’t just travel to sell a player on loan. The main intention probably was to do a business for their long term left-back target Alberto Moreno. The Reds badly need a quality left-back in the summer and has been targeting Moreno for quite sometime now.

The Reds initially offered €18m for Moreno, which was rebuffed. For a while it seemed like Liverpool were unwilling to match the asking price set by Sevilla and as a consequence had set their target elsewhere, with names like Marcos Rojo and Ryan Bertrand been linked with the club.

However, Catalan newspaper Sport claims today that Liverpool now have made a €23m offer, closer to the player’s buyout clause and potentially enough to get the deal done.