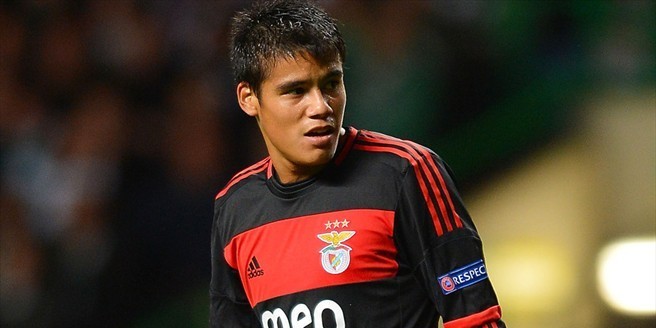 Liverpool have made an approach for Benfica left-back Lorenzo Melgarejo, as manager Brendan Rodgers looking to strengthen his full back department for the coming season, reports The Guardian.

The Reds manager has only Jose Enrique and England U21 international Jack Robinson at his disposal for the left side of his defence, and the former Swansea boss emphasized the need of buying another left-back, during Liverpool’s pre-season tour of Asia.

Valencia’s left-back Aly Cissokho has been linked with a move recently, but it seems like Rodgers has turned his attention to the young Paraguay international instead. If the deal is agreed, which is very close to completion, the 22-year-old would join on a season-long-loan, with a view to make the deal permanent at the end of next season.

Also, the defender would have to apply for work-permit should Benfica accept Liverpool’s proposal and could prove to be a stumbling block for any potential transfer as Melgarejo has only one international cap under his belt.

The signing of Melgarejo, albeit on loan, is very interesting. He started his career as a left-sided midfielder, but Jorge Jesus, the Benfica’s coach turned him to a full-back due to lack of defensive options last season, where he played in the Europa League final against Chelsea.

So, how will he fit into Liverpool’s system? One possibility can be – Rodgers may use him in the left back position, in place of Enrique, when required.

Also, both the players can be used together in a match depending on the opponent, especially in big matches, where sometimes lots of defensive work are required from the wingers. Rafael Benitez, during his time at Liverpool used Fabio Aurelio on the left hand side at times, to give a protection to Emiliano Insúa, without compromising the attacking flow of the team.

If stationed at left wing, Melgarejo will not only help in the attacking department, but can help out Enrique perfectly doing defensive work as well.

Another option could be, using him regularly in place of Stewart Downing on the right hand side. He is good going forward, but it might take some time for him to adapt to a more tactical role.

Overall, Melgarejo looks like a pretty good utlity signing for the Reds should the deal go through and could have a potential bargain in their hands if manager Brendan Rodgers can collaborate his attacking instincts with some defensive understanding.