Liverpool are close to securing a triple deal, if the reports are to be believed. Loic Remy has completed his medical and the deal will be officially announced next week. Last night reports emerged that Liverpool have agreed a deal for Southampton defender Dejan Lovren, while the player set to undergo a medical today. Likewise, a deal for Divock Origi is on the cards as well, with the player currently in Boston completing his medical.

Reds manager Brendan Rodgers will surely be turning his attention towards signing a quality full-back now. Liverpool have had been linked with several left-backs in the last few months, like Alberto Moreno, Marcos Rojo and Ryan Bertrand but have failed to secure a deal for any of them.

Last week, we reported that Liverpool have almost secured a deal for Atletico Madrid defender Javier Manquillo. The 20-year-old is all set to join Liverpool, with the Merseyside outfit having the option to buy him permanently for €6m. 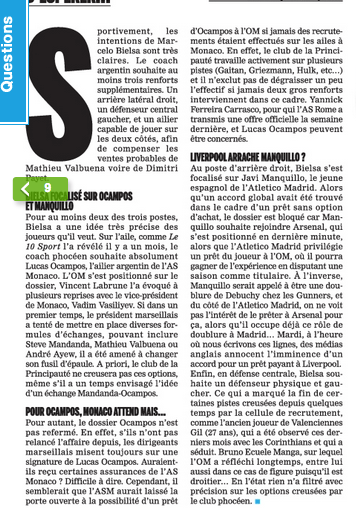 French magazine Le 10 Sport covered this story on their latest edition, but they covered from Marseille’s angle. The French club are also thought to be interested in his signature and Le 10 claim that Atletico are keen to sell him to the French club on loan, but the player personally wishes to join Arsenal.

Arsenal probably won’t need another full-back having already signed Debuchy from Newcastle United. Therefore, it now seems a two horse race with Liverpool emerging as favourites to sign him.