Luis Suarez has been handed a record ban by FIFA that threatens to spell the end of his Liverpool career. The Uruguay international has been given a four-month ban from all footballing activity and nine competitive Uruguayan games, starting with Saturday’s last 16-clash with Colombia.

FIFA took a strong decision this time around and showed no mercy on Suarez, who was found guilty of biting offence for the third time in four years.

Most importantly, Liverpool are the worst victim here. Not only will he be disallowed from even taking trainings at the club, but the 27-year-old will miss 13 Liverpool matches, including their first three Champions League fixtures.

It is till date the heaviest punishment ever landed out to a player at a World Cup, which forced Uruguay to expel him from their team hotel in Brazil.

According to reports from The Telegraph, Liverpool hierarchy are desperate to address this scandal issue at the earliest. The Anfield club will take legal advice over the FIFA verdict and will be willing to sell Suarez, should either Barcelona or Real Madrid meet his release clause, understood to be somewhere between £65 million and £80 million.

But will anyone take the risk of signing a player who will not play the first four months of next season? Catalan newspaper Mundo Deportivo says Barcelona will still go for Suarez if he apologise for what he did and commits to respect the club’s values and traditions and refrain from doing such type of crime again.

Another Catalan newspaper Sport reports that Barcelona and Liverpool have stopped negotiations until they have time to evaluate the suspensions and its repercussions, however they do feel, the length of punishment was harsh. They even organised a poll among the readers. Check the answers below: 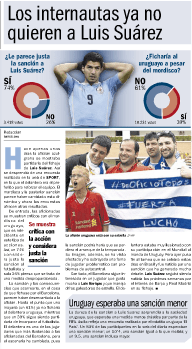 Would you still sign Suarez despite the bite? 61% no 39% yes

Well that sums up the reaction in general among the Barcelona fans.