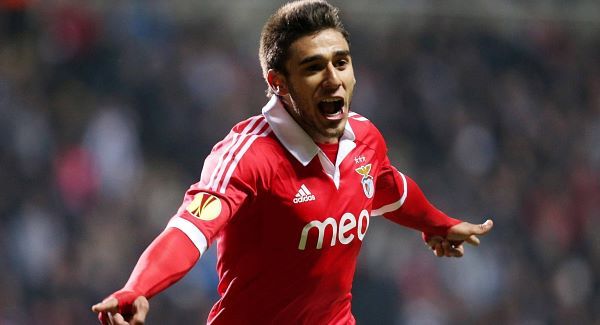 According to Portuguese newspaper, O Jogo, Liverpool are set to complete the signing of Argentine winger, Eduardo Salvio.

The Portuguese paper claim that the Reds have been tracking Salvio’s progress this season and are keen to reunite the Benfica winger with his former teammate, Lazar Markovic.

Liverpool have lacked an attacking threat from wide positions this season and with the impending departure of Raheem Sterling, the reds will need to strengthen their wide options.

Brendan Rodgers’ side have been linked with the likes of Ayew and Konoplyanka, but it is understood that the Norther Irishman has identified Salvio as the ideal candidate for his side.

Salvio has a 40 million pound release clause, but the Reds are not prepared to pay that much. However, it is understood that both Benfica and Liverpool are prepared to reach an agreement.

With plenty of options on the left hand side, Salvio could be an ideal addition for Liverpool on the right. The right sided winger has scored 10 goals for Benfica this season and has been a key member of Jorge Jesus’ side.

Further, the Benfica president is believed to be in London to negotiate a deal for Salvio and Gaitan with Liverpool and Chelsea respectively.

Eduardo Salvio is seen as a direct replacement for England international Raheem Sterling. Whether he can replicate Sterling’s influence for Liverpool remains to be seen, but after the Suarez saga, Liverpool must be cautious when lining up talented but unproven replacements for their star players.