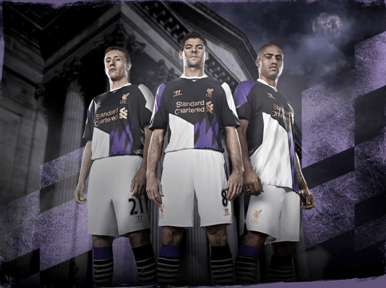 Liverpool football club have revealed their new third kit design, in collaboration with Warrior Football, completing the full three-kit package for the 2013/14 campaign (see the 2013/14 home kit and the 2013/14 away kit).

The American manufacturing group have tried to deliver keeping in mind of the club’s rich history of producing iconic and statement-making kits, while the design seems to have been inspired by the club’s away strip in the 1995/96 season, when the Reds finished Runners-up in the FA Cup, losing out to Manchester United at the Wembley Stadium.

“The kit not only delivers a technical story, but also looks striking and unique on the pitch.”

Liverpool’s managing director, Ian Ayre noted that the kit has a blend of historic feel and contemporary touches in it. He said:

“The third strip completes our full kit for the 2013/14 campaign and we are delighted to share with fans a kit range that has a mix of historic and contemporary touches.

“The team will play in the third kit during appropriate domestic cup games and away Premier League fixtures.”

The kit is basically a mixture of white, black and purple set of colours but with a dominant black base. The contrasting panels on the sleeves throw out a glittering effect. Same combinations of colours have been used for the socks, while the white coloured shorts emblazon the overall the look of the kit.

The emblems of the club are kept in vogue of the other two home and away versions, where the Liver-bird sits predominantly on the crest while two commemorative Eternal Flames and a 96 logo are positioned on the nape of the neck.

The kit has been constructed using Warrior’s revolutionary apparel technology system, War-Tech, where the away kits are powered by breathable, moisture-wicking War-Tech fabric.

The mesh panelling under the arms and across the back of the shirt allows optimum ventilation adding extra comfort, as it helps in temperature control in core heat areas.