Ferguson’s admitted that Liverpool were unlucky to lose today, and that Paul Scholes deserved his straight red. We’ll have to wait on Rooney’s injury before knowing whether he’ll play in Lille or not.

Overall the match was not as one-sided as some might believe – Liverpool are better than Manchester United at keeping the ball but as bad as Arsenal in making it count.

They had their chances and in the second half they had us boxed in, but a combination of van der Sar’s saves, Ferdinand’s defending and Liverpool’s aversion to go on an all-out attack when dominating the game meant that the game was heading for a sure draw. 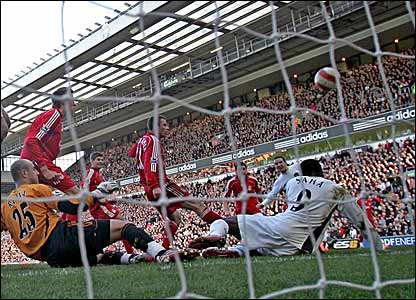 Some will say that United played for a draw – I don’t think that when you’re in Ferguson’s / United’s position that you accept playing for draws. Liverpool kept possession and outplayed Manchester United in midfield, it’s that simple.

In the reverse fixture at Old Trafford Darren Fletcher had kept running at Alonso and his hard work (and a rare good game) help United a lot that day. Today we had a laid-back defensive midfielder (Carrick) and a hack-at-everything attacking mid (Scholes) – Liverpool were bound to dominate.

Defensively, we sucked at left back, once again courtesy of Evra. It’s funny because early on in the game after seeing Evra get forward and down on the left flank, I thought I had made a mistake in my previous analysis of him.

But as soon as Liverpool attacked and Bellamy got down that flank, we had a serious problem because Vidic had to go out of position to cover for Evra. Vida’s good but he’s not that good. Bellamy had an excellent game today but if Evra had been a better defender we wouldn’t have been under the cosh that much.

What else … Carrick’s yellow card was unjust, Kuyt, Bellamy and Riise all tried to dive and win free kicks, Pennant took a tumble in the box, Neville’s hack on Pennant deserved a yellow, Scholes got lucky not to get a yellow before his dismissal, Alonso was very, very lucky not to be given a second yellow-card in the Scholes sending off, and Carragher deserved at least a yellow card for his challenge on Rooney that left him injured. 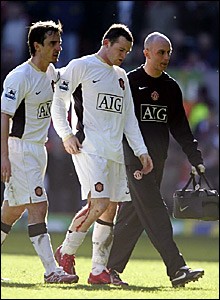 All in all, a cagey game thanks to Liverpool’s keep-the-ball-but-play-defensively style – they could have won it if they had been more adventurous, but that’s not Rafa for you.

Will Manchester United win the title? if Chelsea win their next two games, that’s a 6 point lead with 9 games to go. Anything can happen – but Chelsea have to win those 2 games first.