Louis van Gaal won his first game in charge of United last weekend in thumping Queens Park Rangers 4-0 at Old Trafford. Ángel Di María got the ball rolling with the opening goal and was the star of the show.

Ander Herrera, Wayne Rooney and Juan Mata were all amongst the scorers on Sunday too. Defensively they weren’t really tested but it is back-to-back clean sheets for the Red Devils now.

Leicester City picked up their first win and first clean sheet of the season last weekend with a 1-0 win at Stoke. Leonardo Ulloa scored his third goal in four games and has now scored all but one of the Foxes’ goals since they returned to the top flight.

Nigel Pearson’s side have earned draws against both Everton and Arsenal at the King Power Stadium whilst they were valiant in defeat at Chelsea where they held out the league leaders for just over an hour before going down 2-0.

Kasper Schmeichel missed last weekend’s trip to Stoke with a knee injury but could be fit enough again to start this weekend. In his place Ben Hamer kept a clean sheet on his Premier League debut.

Matt Upson has been injured all season since signing from Brighton & Hove Albion over the weekend. Nick Powell is ineligible to play against his parent club whilst on loan from Manchester United. Both players are yet to make their Leicester City debuts.

Phil Jones won’t be fit again until October. Chris Smalling could return from injury this weekend but faces competition from Tyler Blackett and Jonny Evans to get back into the starting lineup.

Michael Carrick isn’t ready to return yet and Marouane Fellaini has a foot injury – both may struggle to get back into the starting lineup when they are fit. Jesse Lingard is also out injured. 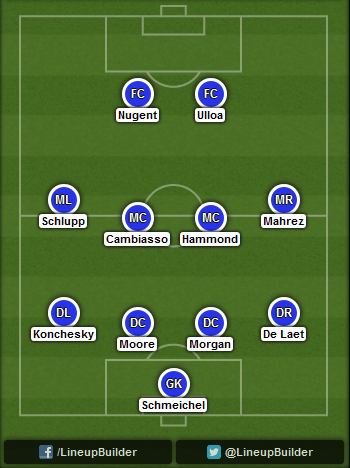 Nigel Pearson has predominately stuck with the same squad in his 4-4-2 formation for his opening four games with only the odd change. Predicting the most common lineup to play this weekend with the exception of Esteban Cambiasso making his first start. They have pace down both wings and on the right with Riyad Mahrez they have a playmaker. David Nugent is getting into space on the break whilst Leonardo Ulloa knows where the back of the net is. The Argentine will be ready to pounce on any defensive errors which Manchester United have been prone to making in the early days of the Louis van Gaal era. 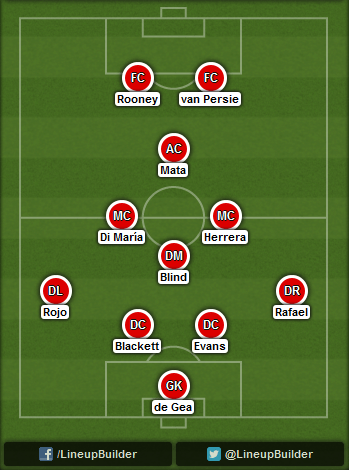 The diamond formation worked last weekend against Queens Park Rangers but it must be said that the opposition put in the worst performance amongst any team of the 2014-15 Premier League season so far. Marcos Rojo and Ángel Di María linked up well together with the latter running the show from midfield alongside Ander Herrera. Juan Mata continues to score for the Red Devils whilst Radamel Falcao could be ready to replace Robin van Persie up front any time soon.

Ángel Di María vs Dean Hammond
If Dean Hammond is indeed given the responsibility of keeping Ángel Di María quiet then best of luck to him. Esteban Cambiasso may know his fellow countryman’s game quite well and could potentially be given the job. Either way, if Leicester City are to get anything from this game they need to disrupt Manchester United’s record signing because he was involved in three of their four goals last weekend and is one of the best playmakers in the world.

Wayne Rooney vs Wes Morgan
Wayne Rooney got on the scoresheet last weekend to make it two in two at Old Trafford but yet to score away from home. Wes Morgan is playing in the Premier League for the first time in his career and has only kept one clean sheet in four matches. Expect the England international to give the Leicester City defence a torrid time, especially when he drops outside the penalty area to collect the ball in space with an opportunity to shoot from long range.

Robin van Persie vs Paul Konchesky
Robin van Persie has made a poor start to the 2014-15 season. Last weekend was the best he looked physically this season after looking unfit before the international break. If he drifts out to the right, supported by Rafael charging forward from full-back, either player should have success versus the slow Paul Konchesky who looks like being the weak point in the Leicester City defence this season. From there RvP can potentially cut inside for a shot or whip a ball in for teammates – both causing problems for the centre-backs and goalkeeper.

Prediction: Leicester City 0-2 Manchester United
I can see Manchester United picking up maximum points between now and the end of the month. Sure, Leicester aren’t going to be as bad as QPR but Manchester United looked like they clicked last weekend and if they continue to do so at Leicester on Sunday then three points are very likely to be theirs. I correctly predicted Leicester to get a point versus Arsenal so I don’t feel I’m discrediting them here I just don’t expect them to match up to the multi-hundred million pound opposition.