Liverpool are edging closer to secure their fourth signing of the season, with reports emerging from Portugal that Benfica forward Lazar Markovic will undergo a medical today, before completing his £25m switch to Merseyside.

According to reports from A Bola, Markovic is expected to be in Liverpool within the next few hours to complete his medical and sign his contract with the Anfield club. 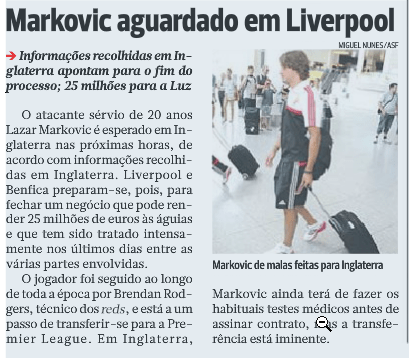 Liverpool are almost certain to lose Luis Suarez to Barcelona and manager Brendan Rodgers is keen to use the money efficiently in buying top players. The Guardian reported couple of days back that Liverpool are closing in on Markovic, who would cost around £25m, and now it seems that the deal is close to happening.

Check the transfer background of Lazar Markovic, we covered in our last article:

Benfica paid £6.25m for Markovic when they signed him from Partizan Belgrade last summer.The Portuguese champions with get only 50% of the transfer fee and from his potential sale to Liverpool, around £12.5m (50%) of the £25m transfer fee.

Markovic will become the fourth major signing for Liverpool, with the Anfield club having already signed Adam Lallana and Rickie Lambert from Southampton, while Emre Can recently completed his switch to Merseyside.