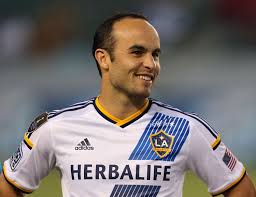 The 32-year-old American offense play maker has sealed himself in the history books of American soccer forever.

On Oct. 4, against Toronto FC at the StubHub Center, Landon Donovan became the first man in American soccer history to be the leader in most goals and assists for the national team and in Major League Soccer.

He broke the assist record that former New England Revolution midfielder Steve Ralston held for seven years with 135 and now the Ontario, Calif native has made the record 136-assist. After setting up Robbie Keane second goal in the 25 minute of the match. The Los Angeles Galaxy would go on winning the match 3-0 at Carson, Calif.

Earlier in the season Donovan broke the MLS goals record that Jeff Cunnigham held for three years with 134, until the 32-year-old play maker broke it in May against the Philadelphia Union in the StubHub Center. Since then he has scored 10 more, to increase the record to 144.

In his final season Donovan solidified his greatness with now controlling the assists and goals record of MLS, and he still has three regular season games to go. Not to mention the playoffs since the Galaxy have already qualified for the post-season, so the Ontario, Calif native has time to increase his records before his career ends this year.

If the Galaxy get to the MLS Cup Final and they win, not only will Los Angeles get their sixth MLS title, but Donovan will also extend his personal record of winning a sixth MLS Cup as well. He currently has five MLS titles, no other player in Major League Soccer history has ever won five, and if he gets his sixth this Dec. then he will add on to another personal records of his.

Now for the national team has the record for most goals (57) and assists (58), which who knows how many more he would scored and assisted if he had not take the sabbatical or was left of the World Cup squad. However, the fact that he was still able to break both records for the USMNT is something to take notice and appreciate for.

Also let’s not forget that Donovan still has one more game for the Yanks on Oct. 10 at East Hartford, Conn. against Ecuador. So who knows he could possibly increase his records for the Stars and Stripes.

Who knows when the next American player will come around and rewrite the history for both goals and assists for the MLS and the national team? Will it be in 10-years, 15-years, or will it even ever happen again? However, one thing is for sure when Donovan walks off the pitch for the last time, the entire nation and possibly the world can take a bow to an American legend that single handily helped put the sport of soccer on the map in the states, by dazzling the states with his feet for 15-years.