To sum it up quickly, a season full of hope, glamour, and global expansion ending in mediocrity, shame, and defeat on the pitch. Maybe that’s a bit dramatic, but for the hype the LA Galaxy were given in 2007, they were a huge disappointment. Fixture congestion and injuries led to the Galaxy finishing fifth in the Western Conference (eleventh overall) with nine wins, seven draws, and a whopping fourteen losses. A late surge couldn’t get them into the playoffs, and when they lost 1-0 to Chicago on the final day of the season, even a 12-4 victory in a friendly against Hollywood United couldn’t make them feel better.

A good run in the SuperLiga distracted many fans from LA’s MLS troubles, as did friendlies against top sides like Chelsea FC and Rangers FC of Britain. In the SuperLiga, LA forced extra time in the final against CF Pachuca of Mexico with a stoppage time bicycle kick from Chris Klein before losing 4-3 in a penalty shootout.

MLS and American soccer legend Cobi Jones retired, and nobody will ever wear his number 13 again after it was also retired. Goalkeeper Joe Cannon, who kept the Galaxy in the playoff chase near the end of the season, was lost to expansion San Jose.

However, prolific MLS goal-scorer Carlos RuÃ­z has rejoined LA, the club he was with from 2002 to 2004.

Carlos RuÃ­z will have to jump right back in to his old role as goal-scorer for LA. 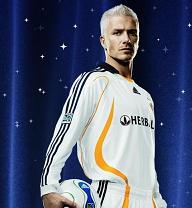 David Beckham, obviously, needs to start doing the David Beckham things. He will probably do better this season, barring injury, if for no other reason than because he wants his hundredth England cap, which he will not get if he is not playing. Also, with England failing to qualify for Euro 2008, he will be with the club for most of the summer.

The Galaxy will have a better season in 2008. Look for them to challenge once again for the title. Healthy players and a less crowded fixture list will be key for them. With as many as ten players injured last season, and playing two matches a week for the last three months, who could’ve expected the Galaxy to win? Of course they did, and look for them to continue their form from the last month of last season, which will lead them to the higher end of the table.