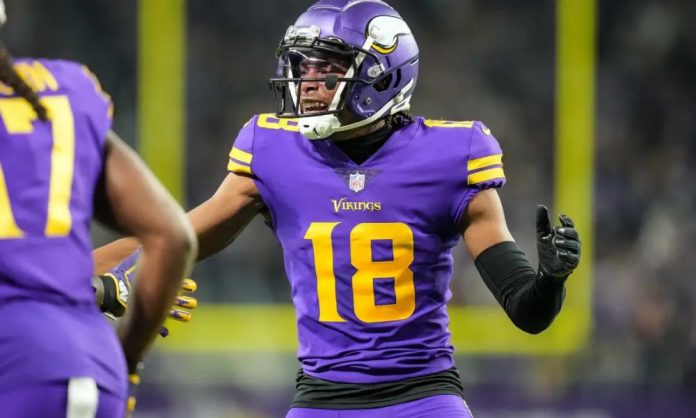 Justin Jefferson, Kirk Cousins, and the Minnesota Vikings enjoyed their week 1 win against the Green Bay Packers as they dominated for a 23-7 win. Cousins threw for 277 yards, 184 of them going to Jefferson. This duo looks like it could be one of the best in football.

Jefferson has a great argument to be made that he’s the best wide receiver in all of football. Kirk Cousins realizes that and had a bunch to say about it, according to The Athletic.

“On that play, a lot of guys go out at the 3 or get to the 1,” Cousins told Jefferson in the moment. “The fact that you got in and got us six and we don’t have to mess around with bringing out the goal-line offense, that’s elite. That makes a difference for our team in winning football games when we’re scoring touchdowns and not kicking field goals. … It’s one of the things that makes you a great football player.”

“You’re just kind of feeling it. You’re not really knowing what’s going on. Just try to slide and find the soft spot in the pocket. … What’s great about Justin, among other things, is that when you put it out there, he goes and gets it,” Cousins said.

The Vikings were clearly prepared for this one. Coming out and beating the Green Bay Packers is never an easy task, but doing so in the way they did was even more incredible. If this team can continue playing as they did throughout the remainder of the year, they have a real chance to get something done this season.

Jefferson talked about why the Vikings were able to come away with this win.

“It was really preparation,” Jefferson said. “Us running the play in practice all week. They left me wide open. We’ll take the gain. Get some extra yards.”