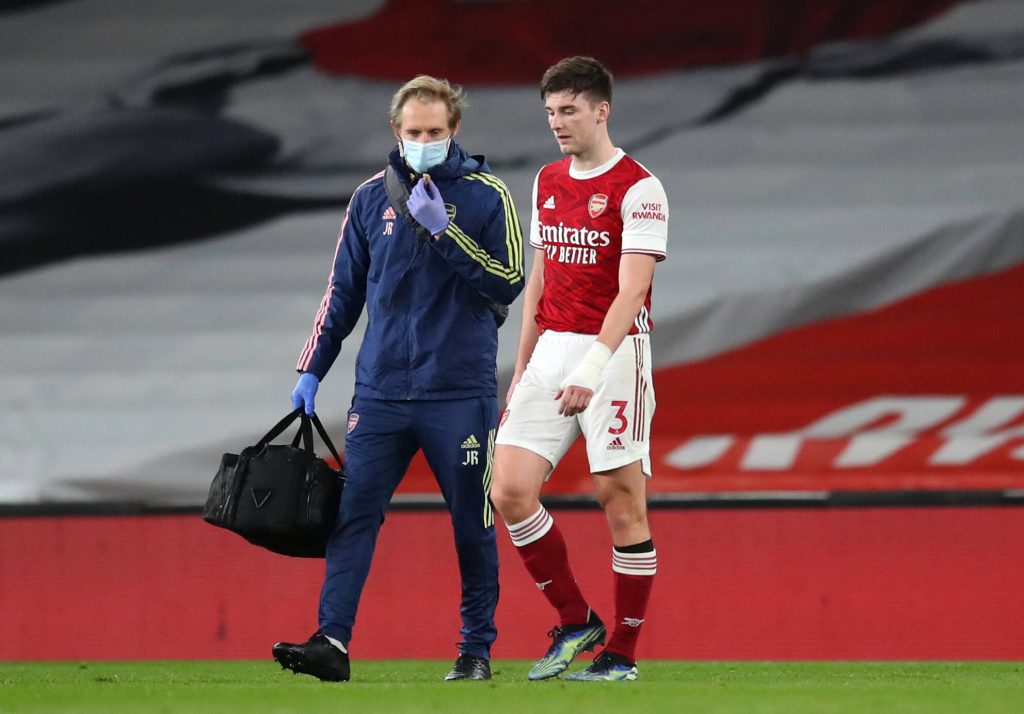 Arsenal left-back Kieran Tierney has been ruled out for four to six weeks with a knee injury, the club have confirmed via their official website.

Tierney has been one of Arsenal’s best players over the last two years. He has had several injury worries during his time at the Emirates Stadium but has looked impressive when fit.

This season, he has started 23 Premier League games and made another eight appearances in the Europa League, scoring twice. He has emerged as one of the favourites for the Gunners’ Player of the Year award.

However, Mikel Arteta will have to do without the Scotsman for up to six weeks, with the club confirming that he will be out of action with a knee injury.

Tierney went off at half-time in the club’s 3-0 home defeat to Liverpool over the weekend, being replaced by Cedric Soares.

The report on the club’s official website claims that he sustained ligament damage, but surgery will not be necessary. He is expected to be back in full training in four to six weeks.

The extent of the injury may come as a relief to Scottish fans. This news means that the left-back should be available for this summer’s European Championships – the first tournament that Scotland have qualified for since 1998.

The best-case scenario for Arsenal is that the former Celtic man returns in time for the final three league games of the season against Chelsea, Crystal Palace and Brighton and Hove Albion.

The 23-year-old is already a confirmed absentee for their next five league games, as well as the Europa League quarter-final tie against Slavia Prague. He will also miss both legs of the semi-final should the Gunners make it.

For now, they will need someone to fill in, with no other natural left-backs at the club. Cedric Soares has played there before but is usually a right-back. Meanwhile, Bukayo Saka could also deputise but is naturally a winger.