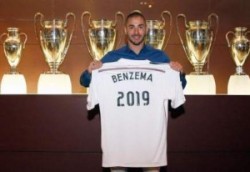 Striker Karim Benzema has signed a five-year extension on his deal at Real Madrid, the club have confirmed on their official website. The Frenchman has committed to stay at the Santiago Bernabeu till 2019, ending all speculations of a move away from the Spanish capital.

Benzema had been linked with a move to the English Premier League for a couple of years now, and Arsenal in particular had been keen to sign him. Arsene Wenger came under severe criticism last season for failing to sign a second striker to support Olivier Giroud up front, and there were several pundits and fans alike suggesting that Benzema would be the perfect fit. Now, Wenger will either have to look at other options elsewhere or settle for young and unproven talents like Yaya Sanogo and Joel Campbell as back-ups to Giroud.

Liverpool, on the other hand, are still looking to replace last-season’s talisman Luis Suarez, who was sold to Barcelona earlier on in the summer. Brendan Rodgers has signed two centre forwards in Divock Origi and Rickie Lambert, but is still on the lookout for a marquee signing up front.

Real Madrid have bought James Rodriguez from Monaco, and Radamel Falcao may follow soon. The competition for places is set to increase, and Benzema will no longer be assured of a starting place if the deal for Falcao goes through.

The Frenchman has been something of a unsung hero for Madrid, often overshadowed by teammates like Cristiano Ronaldo, Angel Di Maria and Gareth Bale. This is despite being one of their most consistent strikers in the recent past, scoring 20 or more goals in each of the last 4 seasons.

Benzema joined Real Madrid from Lyon in 2009 and has an impressive return of 111 goals in 235 games. He scored 24 goals last season as Madrid won the Champions League for the 10th time in their history.