2007 was a year of ups and downs for the Wiz. Ultimately, defeat to eventual champions Houston in the MLS Cup semi finals was about as good as they could have hoped for. Kansas City was one of the most entertaining teams to watch last season, mostly thanks to manager Curt Onalfo’s refusal to play for anything but an all-out win.

Unfortunately, in the Open Cup, they didn’t win. At all. A third round (their first match) loss to MLS bottom dwellers Réal Salt Lake in extra time ended their cup dreams early. This allowed the Wizards to focus on the league, with only one other (friendly) match besides their league matches to worry about. 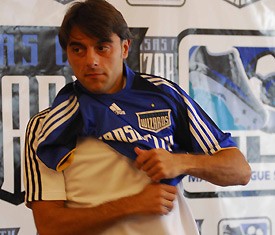 Kansas City just signed their first Designated Player, Argentinean Claudio López. López has bounced around Central and South America for a while, but he is part of Onalfo’s plan to take over the league in the next two years.

Unfortunately, the Wizards did lose defender Nick Garcia to the expansion San Jose Earthquakes and, the big one, Eddie Johnson — first ever MLS player to score back-to-back hat tricks on 26 May and 2 June of last year — to Fulham FC.

Claudio López jumps into quite a role in Kansas City. He will need to lead the team with his experience and also by example, by picking up the goal-scoring role Johnson left behind (fifteen goals last season).

Jimmy Conrad is one of the league’s most experienced and best defenders, and will need to keep it up at the back this year.

The Wiz will need to continue what they were doing last season, but they need to avoid losing streaks to climb to the top of the table this time around. A six, four, and three-match winless streaks need to be avoided, unlike last season.

Curt Onalfo’s attacking mentality will lead Kansas City to glory IF they can find the back of the net on a consistent basis. The departure of Johnson to England leaves a big question mark in that category. Will López have what it takes to pick up the slack in his very first season in MLS?