Juventus were relegated to Serie B last season – after being accused – along with AC Milan, ACF Fiorentina and SS Lazio – of being involved in a match fixing scandal. What’s happened to the club since then?

Thanks to some of the world class stars who stayed with them – and showed club loyalty – specifically Gianluigi Buffon, former Czech star Pavel NedvÄ›d, Mauro Camoranesi and striker Alessandro Del Piero – they are surging back to Serie A.

A little history of the scandal – as a recap – thanks to Wikipedia for the facts used:

In May 2006, Juventus was one of four clubs (along with A.C. Milan, ACF Fiorentina, and S.S. Lazio) linked to an Italian match fixing scandal. The scandal – as you may remember – centered around Juventus’ then general manage; Luciano Moggi — along with others — being accused of dishonest behavior and actions.

Moggi was accused of trying to influence referee assigners so certain referees would be assigned to Juventus’ matches. On May 13, Moggi resigned, along with the entire Juventus administrative council.

It is important to note that no players have ever been accused of any wrong-doing.

Juventus, A.C. Milan, ACF Fiorentina and S.S. Lazio were ordered to stand trial on June 28 2006 and a day before the trial, Juventus’ new team manager Gianluca Pessotto fell from a 4th story window seriously injuring himself.

Manager Fabio Capello left Juventus in early July 2006 for Real Madrid being replaced by former French international Didier Deschamps — who has since managed the club in these difficult circumstances.

When sentences were finally handed down, Juventus was stripped of their 2005 and 2006 scudetto (Italian League Championship), relegated to Serie B, kicked out of the UEFA Champions League for the forthcoming 2006/07 season, and initially docked 30 points for 2006/2007.

Juventus appealed the decision — and after a number of appeals – in November 2006 – the Italian Olympic Committee Arbitration Board reduced the deduction to 9 points.

Some of the club’s top stars did remain loyal to the club, including goalkeeper Gianluigi Buffon, former Czech star Pavel NedvÄ›d, long-serving striker Alessandro Del Piero, Mauro Camoranesi and French striker David Trézéguet (although rumors are that he was forced to stay).

It is with everlasting thanks to these players that Juventus have come back this season, and set about the business at hand and risen up the table relentlessly. They look to have done a great job – and even though they started the season at -9 points – they now top Serie B with 72 points after 35 games with Napoli in second place on 65 points.

Juventus’ goal difference is 45 compared to the next best of 19 by Napoli and in those 35 games – Buffon has conceded only 22 goals.

The current Serie B standings

With the egos of today’s players seemingly increasing every year it is refreshing to see world class players be ready to stand by their clubs — when in difficulty.

The players who have stayed with Juventus have done that — no more so than Buffon — who was easily the best goalkeeper in the world in last year’s world cup — the fact that he has stayed to play lower league football says a lot about his character and spirit. 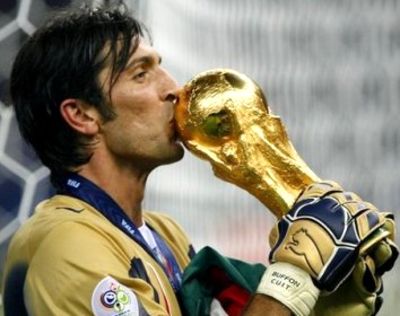 That he may leave Juventus in the summer is possible – but all credit to him for doing the job in repayment for how well Juventus have treated him over the years and given him his chance.

Of course lots of clubs will be after Buffon – but his wish (like many Italians – all their squad in last year’s world cup played in Italy) is to stay in Italy – and he will probably move to AC Milan to replace Dida – if he leaves Juventus at all.

All credit then to the faithful Juventus players – they have ensured the nightmare for their club has been short-lived – and you don’t hear many stories like this in today’s world of pampered footballers.