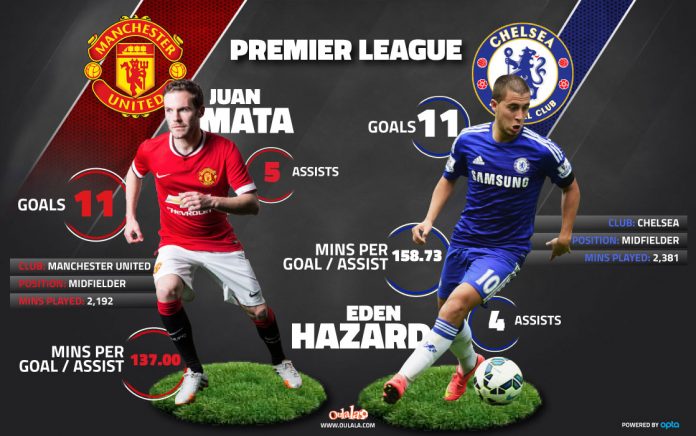 Here are some stats that may have you questioning why Chelsea decided to sell Juan Mata.

It may come as a surprise but Mata’s productivity since joining Manchester United has actually exceeded Chelsea golden boy Eden Hazard in the same spell.

Opta powered fantasy football game www.oulala.com have collated each of the player’s Premier League stats since Mata’s £37.1m transfer in January from Chelsea to Manchester United and they make for some interesting reading.

On a per minute basis Mata betters Hazard for goals and assists. For every 158 minutes that it has taken Eden Hazard to either score a goal or provide an assist in the Premier League since Mata’s move, it has taken Juan Mata 21 minutes less to do the same, scoring a goal or making an assist every 137 minutes.

Hazard is regularly talked of one of the world’s best, whereas Mata was surplus to requirements at Stamford Bridge regardless of being named Player of the Year at the club in both 2011/12 and 2012/13.

The stats suggest that the little Spaniard is proving to be a good signing by the ex-Manchester United manager David Moyes and is becoming a big part of the revival at Old Trafford.