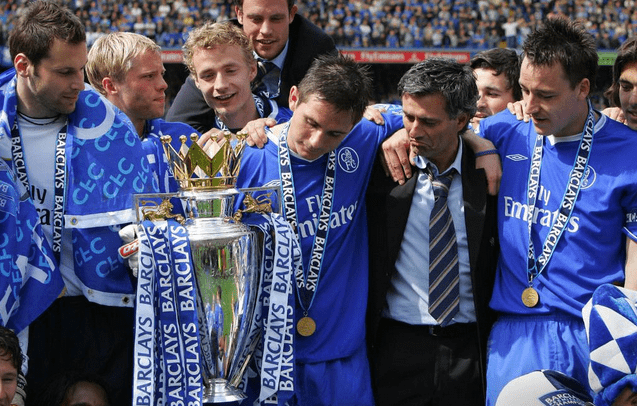 Chelsea manager Jose Mourinho lifted his 8th league title with Chelsea and reflected on how it was a special feeling to win the league with Chelsea again.

The Portuguese manager returned to Stamford Bridge for his second spell with the club and admits it was risk initially. However, having won the title again in his second season after returning, the Portuguese feels it was thoroughly deserved.

‘I am so happy for [the players] and so proud. Everything we did since day one, now we feel we got what we deserved’, he said.

Mourinho also stated how he will not stop winning and will go for the title again next season.

‘I will try [for] another one. I will try always. The day I don’t feel the passion to try again, I stop.’

When asked to share his opinion on the important players in the side, Jose claimed, ‘All of them are important. I look back and can find so many important moments.’

Furthermore, Jose also explained how Palace was crucial game and the team had to do the job today.

‘We showed everything since day one. Everything football demands from a team, we had that.’

‘Today was not a game to enjoy, today was a game to finish the job.’

The Chelsea manager also explained how his team continued the title charge in the face of adversity and are deserved champions.

‘From January 1, not one single defeat. Without Diego, Matic, Remy, Ramires. The team was always there. We deserve.’

Mourinho also reflected on the previous generation of title winners at Chelsea.

Before heading off to celebrate with the team, Mourinho stated that the next job for the team is to beat Liverpool next week and ensure a strong finish, to what has been a remarkable season.