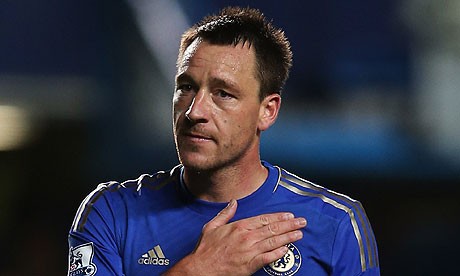 Jose Mourinho has strongly hinted John Terry will be offered a new contract extension following his impressive displays this season.

But with five goals from central defence and him performing to a consistently high level while also remaining injury free it is, in reality, a foregone conclusion that the captain will be handed another one year deal.

The former England skipper said recently he feels as fit as he did 10 years ago and believes he can carry on for a few more years yet.

The 34-year-old has never been someone who relies on pace, with his ability to anticipate situations one of his core strengths alongside tackling, his aerial ability and leadership. Chelsea would be seriously weakened at the back without him – and Mourinho knows it.

“I think everybody wants him to stay,” Mourinho told reporters. “I think he accepted our policy that at a certain age contracts go from year-after-year and John accepted that with a smile. He accepted it as a challenge.

“Last season, he won the challenge by getting an extension. This year he is winning the challenge and the right to get one more extension, which is what the club wants, which what John wants. Sooner or later he will get the contract he deserves.”

Mourinho likes to dangle a carrot under the noses of players aged over 30 – like he did last season with Ashley Cole and Frank Lampard – but, unlike those two previously, there is no doubt that Terry will still be around next season at Stamford Bridge.