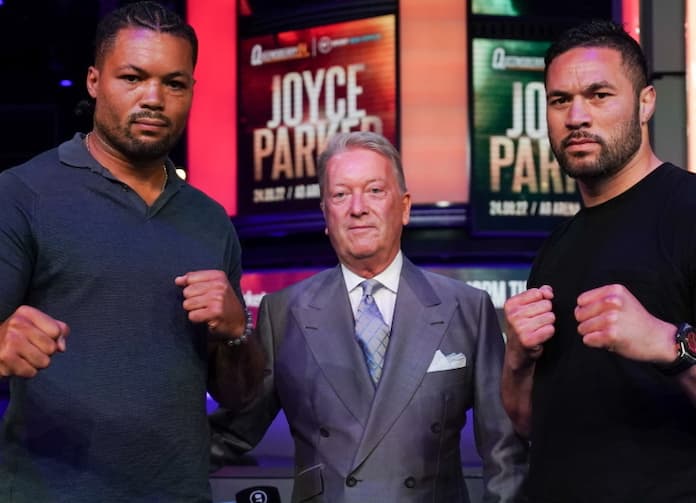 Joe Joyce and Joseph Parker throw down at the AO Arena, Manchester, England this Saturday. Both men come here in good form and fully believe they will get the knockout victory here, so lets hope for an incredible fight between ‘The Juggernaut’ and the former heavyweight champion of the world.

On paper, this is a fight that could go either way. It is a genuine 50/50. Both warriors have sensational wins on their respective resumés, and have world title aspirations in the next 12 months. Who will come out on top in Manchester this weekend?

If you fancy a wager on this fight in the heavyweight division, read on and check out our betting tips and predictions, as well as making use of the various free bets and betting offers on this page.

This mammoth heavyweight collision between the number one and two ranked fighters in the WBO rankings goes down on on Saturday night across the Atlantic Sea in the UK.

In one corner you have Joe Joyce, the undefeated Brit who has gone from strength to strength since turning professional after the Rio 2016 Olympics, and is just one win away from a world title shot.

In Joseph Parker you have a man who is a former world heavyweight champion, boasting wins over the likes of Andy Ruiz Jr and Derek Chisora on two occasions. This fight has well and truly captured the imagination of the boxing public, and it finally goes down this weekend.

Despite being the less experienced professional, Joe Joyce is seven years the elder of his New Zealander opponent. Parker on the other hand became a world champion at just 24 years of age, when he beat Andy Ruiz back in 2016 via majority decision in a close fight.

This fight is definitely one that excites boxing fans all over the world, including in the US with the potential match up against the likes of Deontay Wilder in the not so distant future.

Both of these men will be hopeful of a world title shot next year, so will be desperate to get their hand raised on Saturday night. Without further ado, here are our Joe Joyce vs Joseph Parker betting picks and best bets.

Our first betting tip is that Joseph Parker will box a superb fight and defeat Joe Joyce on Saturday night at the AO Arena in Manchester, England.

Despite being the underdog, it is fair to say that Parker has been there, done that, worn the t-shirt on the world scene of heavyweight boxing. The fact he was a world champion at just 24-years-old, shows his pedigree and just how good he can be and how much of a threat he is tot the rest of the heavyweight division.

Parker has some highly impressive wins over the likes of Andy Ruiz Jr, who has obviously gone on to himself becoming a unified heavyweight champion of the world, defeating Anthony Joshua at Madison Square Garden a few years ago.

Joe Joyce has some great wins on his resumé too, but not on the level of Parker. The win over Dubois is the best on the record of ‘The Juggernaut’, who won the fight via 10th Round TKO as a betting underdog against the younger, fresher man.

Joyce’s style is a strange one, as he looks slow and easy to hit, yet seems to find a way of breaking down his opponent time after time, taking their best shots before getting his own off and stopping almost every man he has been in the ring with.

However, Joyce has never fought someone on the level of Joseph Parker, and here at SportsLens, we think the superior experience, speed, timing and accuracy of the New Zealander will be the telling factor here, frustrating the British heavyweight and claiming victory over the 37-year-old.

Our Best Bet for this WBO Interim World Heavyweight Title fight is that Parker will box his way to a decision victory and becoming the number one challenger for Oleksandr Usyk’s WBO belt. This is priced sensationally with Bovada, who are offering a mouth-watering +333 for this outcome.

Parker has gone to the judges’ scorecards on the last three occasions, against Derek Chisora twice and Junior Fa before that. Parker does have 21 KO’s in his 30 wins, but has looked like more of a boxer in recent time rather than a big puncher.

To back this us, Joyce arguably has the best chin in the heavyweight division. ‘The Juggernaut’ seems to have an innate ability to walk through anyone’s best shots without so much as wobbling.

That mixed with the fact that Parker has gone the distance in his last last three fight, makes us believe that this fight is destined for the judges’ scorecards yet again, but that the former world heavyweight champion will get the nod and win a unanimous decision.

Just a points victory is our best bet, as we think there could maybe be a dodgy scorecard, hence why we haven’t tipped the unanimous decision for Parker, despite thinking he will do enough to win the majority of the 12 rounds.

Haven’t claimed the Joyce vs Parker betting offer yet? Don’t worry, take a look at the best betting sites and claim the best bookmaker free bets. Be sure to also check out the best offshore betting sites.

When Is Joe Joyce vs Joseph Parker?

TV channel: If you have ESPN on your TV, you will be able to watch this compelling heavyweight contender clash live from the AO Arena on ESPN+, provided you are a subscriber to the channel and live in the US.

Live stream: ESPN subscribers in the US can also catch the action online and via the ESPN app, provided you have the app downloaded on your device, are a subscriber to the channel and reside in the United States.