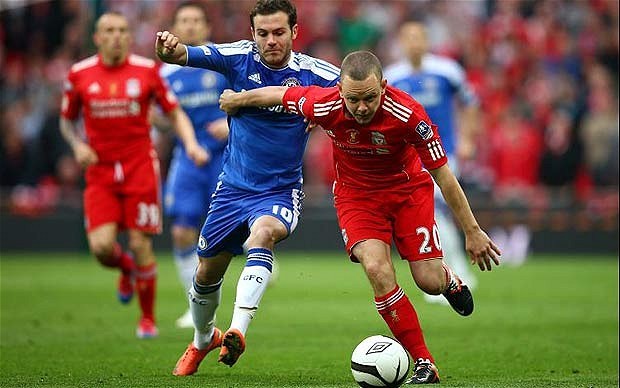 Jay Spearing was built for the English Championship. Having progressed through the Liverpool academy to make a number of appearances for the first team, last season Liverpool gave him the clearest sign yet that he wasn’t going to make it. A season long loan to Bolton Wanderers ensued and Jay Spearing excelled.

Now, Dougie Freedman has publicly declared his interest in permanently signing the 24-year-old.

Having played a bit in Liverpool’s pre-season tour, Spearing would prove a good addition to Freedman’s squad who has already signed Jermaine Beckford and Alex Baptiste amongst others.

A combative midfielder, his touch and technical abilities let him down when playing on the manicured pitches of the Premier League. However his defensive qualities: strong in a tackle and Terrier-like approach to closing down and marking make him an ideal defensive midfielder for the Championship.

For Bolton, a club who arguably belong in England’s top flight, he is the type of player who would certainly take them a step closer to promotion and, at only 24, provide a solid base in midfield for the future.

Playing 39 games last season, even scoring a handful of goals, he was a key figure in Dougie Freedman’s Bolton, urging his teammates to take responsibility of their early season poor form and “stop making silly mistakes” as Bolton looked to improve their standing.

His 30 Premier League games will have given him good experience and being surplus to requirements at Liverpool he would be available for a nominal fee; something which is clearly important to Freedman:

“We’ve got Financial Fair Play and I’ve got a responsibility to this football club.”

“If somebody like Jay comes up and the deal is right for the football club, then yes, we will be looking at that.”

From a Liverpool perspective, Spearing is only available, it would be better Bolton have their finances in order to make a bid, that would surely see him move away from Anfield for the last time.