It hurts, doesn’t it?

No use blaming the ref for not giving a penalty – in a final in extra time, it’s very hard to give a penalty unless there’s a very clear-cut case. In Giggsy’s case, he got touched and slid in and collided into Cech – it was quick and fluid and it would have been very hard for Steve Bennett to make the call.

Overall, the ref did great. No use blaming the ref.

Chelsea didn’t cheat either – you can’t expect Cech to say that yes, it crossed over the line – it was a goal that no one saw, so hell, we lost a game we probably could have / should have won.

Is there anyone to blame?

Nope – we did the best we could, and today it wasn’t enough.

Which is why we have to improve.

Manchester United’s have had a good season, great if you compare it to the last 3 seasons, but I want more. You could see the hurt in the eyes of the players, and you could see that 2 FA Cup final defeats, and consistent heartbreak in the CL has taken it’s toll on it. If Manchester United hadn’t won the Premiership, I’d have genuine fears for the morale of this group. 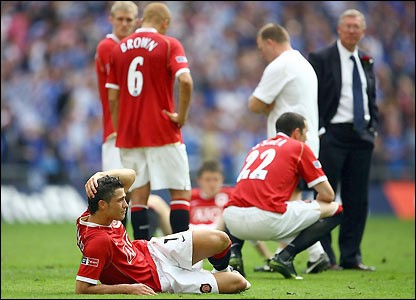 But we’ve done well this season. And we can also improve greatly. Scholes will play an increasingly deeper role next season, similar to today and as a result Ferguson has to pick the right players who can not only replace Giggs and Scholes long-term but also gives us the immediate quality that we need to improve for next season.

Congratulations Manchester United – the season’s over, and you’ve made me fuckin’ proud.

Now we have to figure out how to be better.