There have been at least 8 people killed this week-end, towards the end of a league match after part of a Brazilian stadium collapsed. The accident, which took place at the Fonte Nova stadium in Salvador, occurred after some of the concrete stand fell away with 10 minutes remaining in the game between Bahia and Vila Nova, a team from the nearby state of Goias. Several fans fell through the large hole that was created from one of the highest stands, plummeting around 40 metres. The fans had been celebrating the side’s promotion to the second division. It’s been reported that around 60,000 fans were in the stadium at the time and many were unaware of the tragedy until after the final whistle.

Salvador is in contention to be one of the cities to stage the World Cup in 2014 after Brazil were confirmed as the hosts last month. Upon hearing this news I started wondering — is Brazil going to be safe enough to host the World Cup? 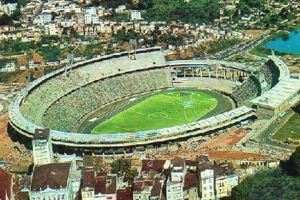 The last time the South-American nation hosted a World Cup was in 1950, that year the Auriverde lost in the final to Uruguay. It was in the same game that boasted a world-record crowd of 199,000. However, even that stadium – the Maracanã in Rio de Janeiro requires a lot of work. The government has issued £550m for the hosting of the event and much of the money will need to be used on the tired and crumbling stadium infrastructure, obviously if sadly highlighted by recent events. Four of the 18 proposed stadiums will have to be completely rebuilt from scratch.

Some of the stadiums’ facilities are so basic they are not even suitable for television commentary! Therefore nearly every stadium will have to undergo extreme makeovers to reach FIFA requirements. As well as the issues surrounding the stadiums Brazil’s domestic football is notoriously rigged with corruption. The country suffers extensive poverty and the increasing problem of drug-related crime.

Ricardo Teixeira, the president of the Brazilian Soccer Federation (CBF) reacted viciously when questioned about the crime levels in his country. “I believe that the violence issue today is an international issue. We had a recent good example during the Pan-American games in Rio – there was no violent event there. If you go to major cities in the U.S. you see kids killing other kids in schools, at least we don’t have that.”

However, research has shown that Brazil’s murder rate is more than four times higher than that of the U.S. The rates for other crimes are also similarly high. The most problematic areas of the country are Rio de Janeiro, Salvador and Recife. Worryingly foreign tourists are the main targets for the criminals, especially at night. A scary thought for fans of the game who will be looking to book their tickets to Brazil. Robbery and “quicknapping” are also rife, especially outside banks and ATM machines. In “quicknapping” criminals abduct their victims and hold them hostage for a short period until a ransom payoff is made by the victims family, business or bank card. Some victims have suffered beatings and/or rapes.

Despite the concerns and poor state of the country their fans are rich in celebrations and will be sure to light up the tournament with their carnival style Samba partying. The opening ceremony will no doubt be a colourful and energetic display as the boys in yellow begin their campaign for a sixth World Cup title. FIFA have been impressed with the initial plans and organisation. If improvement is not made and they fail to meet the standards then a replacement nation will host the event, most likely South Africa dependent on how successful their World Cup is 2010. The same applies to the Africans with Germany being likely backup for them.