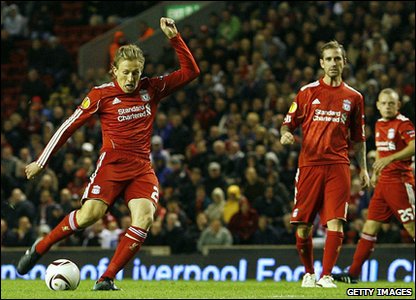 Inter Milan are looking to sign a quality central midfielder in the summer and have targeted Liverpool midfielder Lucas Leiva to fill the role.

The 27-year-old didn’t enjoy a great start to his Liverpool career and was even booed by the home fans. However, he won back the heart of fans with series of strong performances and has been one of the key players for the Reds in the last few years.

Last season has been bit of disappointment for the Brazilian where he struggled to get regular games. Skipper Steven Gerrard has been deployed in the defensive midfield role while The Times reported Lucas could be one of several players, who could be heading the Anfield exit door in the summer.

The Reds had been linked with Porto’s Fernando last season and could go for him again this summer. Any arrival of a new central defensive midfield would surely mark the end of Lucas’ career at Anfield. Inter see this as an opportunity to sign the Brazilian and have already made an approach with the player’s representatives.

According to Sportmediaset, Inter are pondering to lodge an official bid, but Lucas’ high wages could be a problem for them.

Liverpool has slapped an asking price of €13m for Lucas, but Nerazzurri are hopeful of reducing that transfer fee through negotiations in coming weeks.