Unless you have been sleeping under a rock this past decade or so, you should know that one of the best (if not the best) football manager videogames out there is a little gem called Football Manager. In which case you should also know that the reason the game is so well-designed and so popular, isn’t because of its fancy match engine or cool player pictures. No, FM owes its large success primarily thanks to its player database.

So, what if you could have a website that not only replicates the immensity of the FM database, but which on top of the player’s height, weight, and other ordinary statistics also includes useful bits of information such as the player’s agent, his contact information, recent & past injuries, and a nice little demo video of said player in action? And what if on top of that, you could one of the biggest player agents in the football world (one Mr. Pini Zahavi, the man behind Rio Ferdinand’s transfer to Man Utd and the Chelsea take-over by Roman Abramovich) to jump on the boat and be part of the company’s board?

IMScouting is the first system of its kind to try & provide a full catalogue of football players in leagues from all over the world, including Europe, Africa, South America, North America and Asia. I’m talking about all kinds of player information here, and not just the height, weight, scoring stats banalities you can pretty much find anywhere: but also salaries, estimated market value, strengths, weaknesses, which agent represents the player, and about a dozen more useful categories of information. The database has been created, and is constantly updated, by a network of football experts based locally across the globe.

The data featured on IMScouting includes, but is not limited to:

Of particular interest to Soccerlens readers is the Special Report feature, an in-depth analysis using the vast amounts of data from the player database. IMScouting will make regular rankings such as the “Top 10 heaviest players in each league“, or “Most common foreign nationality per league“, and many many more. Given the extensive data included on the website, the possibilities are endless. Their most recent ranking, Top 20 Most Expensive EPL Non-Starters, was featured here on Soccerlens,

IMScouting has kindly agreed to let us use their Special Reports feature on Soccerlens, which will appear as a regular weekly or bi-weekly feature on our website. So stay tuned for updates. 🙂

The following, taken from TechCrunch’s in-depth review of the IMScouting service, should give you a better idea on what this project is all about.

IMScouting collects in-depth data on 48 leagues in more than 40 countries with a total coverage of over 40,000 professional footballers. The data is collected using a network of 40 “correspondents”â€”football experts situated locally in European, African and Latin American countries that IMScouting employs to report data back to the mothership. Propriety crawlers are also used, but to a lesser degree. In-house expertsâ€”journalists, ex-players and other football expertsâ€”review the data to ensure reliability before it’s made public.

IMScouting also provides general information such as results, fixtures and stats on more than 500 leagues around the world. These include full match reports for some countries in Eastern Europe and Africa that are not typically covered by the mainstream press. There is also an assortment of content in the form of daily football-related business news, a weekly “Player to Watch” and special reports.

The company believes that 65% of professional football players are traded each season, with 700+ teams looking for talent in Europe alone. They also believe that there are over 150,000 active football scouts and agents worldwide. To this add the huge amount of football fans seeking reliable, high-quality information about their favorite clubs and players. IMScouting believes this all amounts to a huge opportunity.

So, that about covers everything you can see from the “outside”. Since IMScouting was kind enough to give us Soccerlens editors a trial account, let’s take you “inside” the beast and give you a tour. 🙂 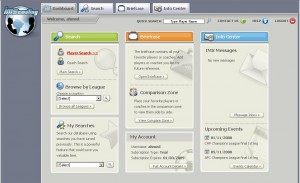 When you log-on into your account, you are immediately taken to your Dashboard page. This is sort of the “control tower” if you will, of all the tools which are your disposal. At the moment, these are divided into three categories:

Obviously, this is the most interesting feature, and is divided into 4 tools:

.
Player Search
Much like the Search feature in Football Manager allows you to do, all parameters included in the database are searchable. 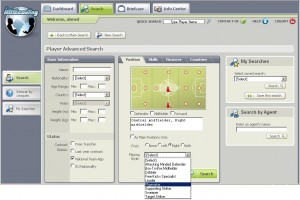 For instance, you might want to look for a Spanish central midfielder based in England, aged 20-25, 1m70-1m80 tall, capped for his country, and with a “playmaker” playing style. Poof. Cesc Fabregas pops up. Too easy? How about a central/right midfielder with a maximum age of 30, the “dribbler” characteristic, and the ever-so-useful “EU Nationality” tag. Bam! 75 results. The database is at your fingertips.

Now, I know what you’re thinking. There’s just got to be more than 75 players corresponding to that last search. I’ll get to that in a minute. For now, let’s continue the tour.
.

Coach Search
Much like the Player Search, I suspect this one will offer similar search capabilities for coaches as well. Perhaps something like “preferred line-up” (4-4-2, 4-3-2-1, etc.), “playing style” (aggressive offensive football, counter-attack, etc.) and so on.

Unfortunately at time of testing, this feature was not yet available.
.

Browse by League
Self-explanatory. Want to browse the players from the Cyprus first division? Load up the page, it will give you the league standings, and you can click on each individual club to display a full roster list.

The only snag? The player database is not available for all countries. While results, fixtures and league tables for almost every league in the world, at time of testing only the following were fully covered (i.e. contained players from that league).

Obviously compiling all the information takes time. Still a very respectable number of leagues, if you ask my opinion.
.

My Searches
Searches the database using searches you have previously saved. For time-saving effectiveness.

The Briefcase section can unquestionably be compared with the “Short list” feature of Football Manager. This is where you tag all the players which interest you, and keep them in a tidy little folder where you can find them later.

You can create & name several sub-categories in your briefcase, and any time you visit a player’s page, it will give you the option to “send” that player’s info sheet to the sub-folder of your choice. Pretty neat. 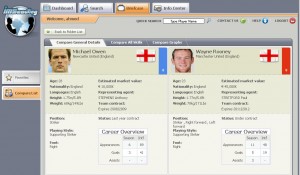 The Briefcase also contains the Comparison Zone, and again, the similarity with Football Manager is striking. By loading up the profile of two players simultaneously, you can compare all of the information on their fact sheet. For that moment when you have to decide who is the cheapest/most cost-effective purchase.

Essentially, your internal communications/email service. For now, it seems to be limited to contacting IMScouting staff only (Customer Service, Sales, Support, Advertising), but who knows? Perhaps in the future you may be able to contact a player’s agent directly by using this tool. Obviously, this use would have to be limited to football professionals, but it’s a feature I’m sure the IMScouting people are keeping in mind.

Now, most of you are probably asking: “well, this is all nice & dandy, but what’s all this cost and is it really worth it?“. Appropriate questions.

The company’s current business model is based on a subscription service. Since their main target customers, at least initially, are football professionals (agents, scouts, etc.) the service is quite expensive: â‚¬1,200 for an annual membership and â‚¬400 for a quarterly membership.

With that said, with future developments of data syndication and making the service football fan-friendly, regular users like you and me will no doubt be able to browse our favorite players, at a significantly reduced cost. I imagine not all features would be included of course.

Is It All Worth It?

Or, putting it another way, what makes IMScouting better than Football Manager? After all, the FM games are known for their immense & accurate databases, provided by thousands of fans across the world, and coaches/players/agents have been known to use FM games in the past for their scouting needs.

Let’s go over some of the criticisms IMScouting deserves.

Firstly, the player database is incomplete for now. Granted, the service’s been launched just recently, but it really pales in comparison to FM. IMScouting is boasting over 30,000 players in their database. FM 2009 will have over 350,000. Numbers don’t lie. It’s David vs. Goliath.

Also, the “skills” characteristics are, well, very broad. If you recall, there are only 4 categories (Jumping & Heading, Technique & Creativity, Acceleration & Pace, Physical & Strength), given a mark out of 5. By contrast, FM has 36 different categories, all of which are marked out of 20! Not the same ballpark clearly. Besides, some players have incomplete profiles and information missing.

So what’s IMScouting have that FM doesn’t have?

Firstly, the most important info missing from FM (and provided by IMScouting) seems to be Agent information. IMScouting is targeted essentially at football professionals, so knowing who to contact when looking to buy a player should be very helpful.

Also, as the database grows, it will be continuously updated. Correct me if I’m wrong but short of downloading fan-made updates, FM doesn’t have that (you have to wait till the mid-year patch or next year’s game).
.

So the bottom line, in my humble opinion, is that IMScouting offers a service with great potential for the future, especially for football professionals. As for us football fans, nothing can beat FM. For now.